It didn’t take long for the lead singers of last night’s Train/Maroon 5 doubleheader at the Molson Amphitheatre to reveal their diametric extremes: M5’s Adam Levine chose to channel his inner Jagger, while Train’s Pat Monahan decided to exhibit his inner…Rihanna?

Yes, for a Grammy-winning pop band that has five studio albums to its credit and 75 minutes of concert time at its disposal, San Francisco’s Train managed to derail itself in almost no time flat, spending a good portion of its show indulging in the type of behaviour that makes you wonder if they were quaffing a few too many glasses of their new Drops Of Jupiter brand of vino when initially planning this tour.

Perhaps singer Monahan realizes he’s more annoying than charismatic as a live performer, or maybe he’s as tired as I am of his lyrical asides that often have nothing to do within the rest of the song he’s singing, but the amount of time Train spent concentrating on either comedy relief or head-scratching covers like sandwiching Blondie’s “Heart of Glass” (sung by their touring female cellist, no less!) with U2’s “I Still Haven’t Found What I’m Looking For” — which also involved a weird tango of sorts between Monahan and said cellist, while the remainder of the band played drums and pedal steel guitar — was almost insulting. 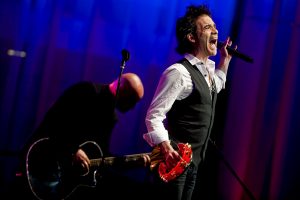 It didn’t stop there, as a full-on rendition of Rihanna’s “Umbrella” followed. That’s great if you’re in the mood for karaoke or watching your favourite cover band, but when you’re headlining outdoor venues that attract approximately 12,000 people, you’d think you might want to give some of your fans some actual Train music. Points at least should be given to Train for having a sense of humour: midway during “She’s on Fire,” Monahan doffed a cheap cowboy hat and had the band transition into a quick country shuffle.

But then the overkill set in again; as he invited some 40 female audience members he dubbed the “Trainettes” to join him onstage to close out the song. To be fair, the audience got satisfying renditions of the infectious brain-gnawing pop nuggets like “Hey Soul Sister,” “Calling All Angels” and “Drops Of Jupiter,” all which involved sing-alongs from a game crowd who can’t resist a snappy melody and a beguiling chorus. But whenever the band stopped playing, the fact that you could actually hear the silence in between songs suggested the audience was quickly tiring of Train’s antics.

Kicking Train’s caboose by showing them how it should be done was fellow West Coasters Maroon 5, who took no prisoners from the get-go. Opening with their hit “Moves Like Jagger,” singer and The Voice judge Adam Levine and his five-man electrical band brought the funk out early, racing through “Harder To Breathe,” “Sunday Morning,” “If I Never See Your Face Again” and “Misery” without stopping for breath. Prince-inspired rhythmic guitar flourishes and a pulsing disco beat got the crowd engaged in some fancy footwork, and in case there was a dense bulb in the audience who couldn’t connect the dots, a giant disco ball was unveiled to feed the party vibe. 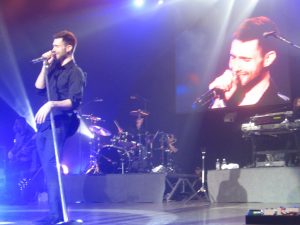 Suddenly, after warming everyone up, Levine and his crew changed directions and brought a harder-edged rock feel to their execution, as the singer slung a guitar over his shoulder and engaged in solo duels with James Valentine. Throughout “The Sun,” from the band’s latest album Hands All Over, and the upbeat “Wake Up Call” and “Stutter,” the momentum shifted, the continuing thread throughout Maroon 5’s 75-minute set being Levine’s impressive vocal range and effective falsetto.

Although neither Levine nor Monahan were particularly compelling, at least Levine had momentum on his side with strong musicianship and a torrid pace that set the standard for the evening, capping Maroon 5’s set with their stirring breakthrough ballad “She Will Be Loved.” As for Train — well, Pat Monahan isn’t Bono.

Be the first to comment on "Maroon 5 outpaces Train"