The latest Texan blues-guitar hero comes Friday to the Rivoli. You know you’ve got potential when Eric Clapton invites you as the only newcomer to perform at his occasional Crossroads Festival. 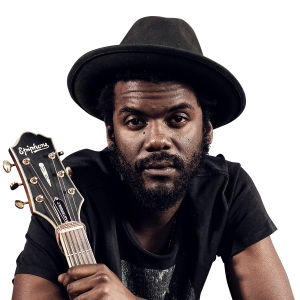 “That was pretty amazing for me,” recalls Clark Jr., rolling on the roads of Nova Scotia prior to his intimate gig at The Rivoli Friday night to promote his debut Warner Music EP, Bright Lights.

“Since I’m from Austin, and Jimmie Vaughan, Doyle Bramhall II and Hubert Sumlin all being from there, Clapton was asking about new acts and they brought my name up, which was amazing.”

Although Clark held his own on stage with Clapton, Bramhall II, Derek Trucks, Susan Tedeschi and Sheryl Crow, the truth is that the 27-year-old axe master, whose hybrid blues also incorporates rock, soul and R&B, has been Austin’s best-kept secret for over a decade.

Acknowledging that it was his attendance at a Michael Jackson concert that first turned him onto guitar, Clark Jr. calls himself a “child of the ’80s” when it comes to his initial influences.

“I listened to a bunch of soul and R&B music when I was growing up and was always kind of interested in what the guitar player was doing,” he admits. “So when I was 12, I got a guitar and listened to (Jimi) Hendrix and Stevie Ray Vaughan. It went on from there.”

He also struck up a friendship with fellow 12-year-old guitar buddy Eve Monsees (later of blues-rock quartet Eve and The Exiles, and female rockers The Bluebonnets, led by The Go-Gos’ bassist Kathy Valentine), and both mentored each other on techniques, new recordings, and exploring new genres.

Clark Jr. says it was a trek down to famous Austin music club Antone’s with Monsees that truly turned him onto the blues.

“The blues jam was awesome, and I kind of fell in love with it, not thinking that we were going to eventually go in a certain direction,” he admits.

Antone, who died in 2006, also extended the favour to Gary Clark Jr. — when the budding guitarist was only 15.

“He was major,” Clark Jr. admits. “Clifford Antone actually introduced me to Jimmie Vaughan, Doyle Bramhall, Hubert Sumlin, James Cotton, Pinetop Perkins — anybody that came through, and get me up on that stage with them. He was really encouraging.

“Actually, my first time playing at Antone’s, he hooked me up with Hubert Sumlin, James Cotton, Mojo Buford, George Raines, Riley Osbourn, it was an all-star cast of folks. He said to me, ‘You really want to do this?’ And I said, ‘Yeah,’ and he said, ‘There you go kid — go for it!’

“That pretty much changed everything for me.”

He became so revered as a guitarist that by the time he was 17, Austin had bequeathed him his own Gary Clark Jr. Day.

In the ensuing years, Clark Jr. has released three independent albums and a self-titled EP — 2005’s Tribute, a mixture of covers and originals; two more collections of self-penned songs in 2008 — 110 and Worry No More, and last year’s Gary Clark Jr.

“I’d love to do some more acting,” Clark Jr. confesses. “For now, I’m a little busy just doing this music stuff, which is fine by me. I don’t really have any major long-term goals: I’m a day-by-day type of cat.

Tickets: $21 from Rotate This

Be the first to comment on "Gary Clark Jr.’s taking quite the axe to us"