Rod Stewart gave the adoring crowd exactly what they wanted at the Air Canada Centre, while low-key Steve Winwood paraded the hits in an extended jam.

He may be the spryest 68-year old on the planet.

We’re not exactly sure what it is that Rod Stewart sprinkles on his Wheaties to keep himself so youthfully agile, but Sunday night’s performance at the Air Canada Centre revealed a man that could give Dorian Gray a run for his money.

Over the course of a two-hour show packed with most of his greatest hits, Stewart certainly gave the adoring crowd of approximately 17,000 a run for theirs, dancing and marching, slipping and sliding, executing jumping jacks and, at one point, even falling to the stage on his back — arse and legs pointed skyward — before picking himself up and making a joke about it.

And of course, there’s his usual shtick near the end of the show when he kicks 30 or 40 autographed soccer balls into the crowd while singing “Hot Legs,” losing his place only occasionally when he needed to aim the ball for a well-placed punt. 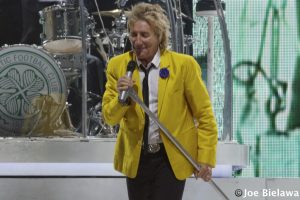 But if you’re wondering why this tour is called “Live the Life,” the affable Scotsman with scruffy locks pretty much covered every angle and definition possible relating to the term.

There was opulence: Stewart, initially dressed in a silver suit, black shirt, silver tie and polka dot socks, was accompanied by a 14-piece band consisting of both sexes. Including a harp player. When’s the last time you heard a harp solo in concert? But Stewart had Julia Thornton pluck one during an acoustic rendition of the Van Morrison-penned “Have I Told You Lately” — further accompanied by an additional seven-piece Toronto-based string section — that added to the music spoils.

There was family: Stewart trotted out his 26-year-old daughter Ruby to sing a song of her own, before joining dear old Dad for a duet of “Forever Young.” Father Stewart also praised his own father during “Can’t Stop Me Now,” projecting an image of the two hugging on one of several huge screens as he sang about the early years of his career, a new song from his recent album Time.

There was history: although most of Stewart’s raspy-voiced material consisted of his biggest solo hits — “Maggie May,” “You Wear It Well,” “Do Ya Think I’m Sexy?,” the written-in-Toronto chart-topper “You’re in My Heart” and “Tonight’s the Night” — he did reach back to his Faces days for the rowdy rocker “Stay With Me.” He also ran a short home movie of a club jam involving Long John Baldry, Eric Burdon and his current opening act, Steve Winwood.

And there’s Stewart’s rather charming personality. Just after completing the opening one-two punch of “This Old Heart Of Mine” and “Having a Party,” Stewart bowed to the crowd and asked them “to please accept my humble apologies” for having to bump the date of the show, which was originally booked for April.
“I’ve added three extra songs to the set we don’t usually do, and rightfully so. We’ll make it up to you this evening.”

Well, the only truly unexpected set list appearance was the soulful mid-’90s hit “The Motown Song” (Montreal got both “The Killing of Georgie Pt. 1 and 2” and “Sailing” on Saturday night) but one didn’t call Stewart on it because he compensated the crowd in so many other ways, not the least through his heartfelt singing and by offering just enough novelty in many of his hit arrangements to freshen them up.
He was a lot of fun, and the pizzazz couldn’t help but put a smile on your face.

If Rod Stewart’s performance was the definition of flamboyant, opener Steve Winwood was the direct opposite. 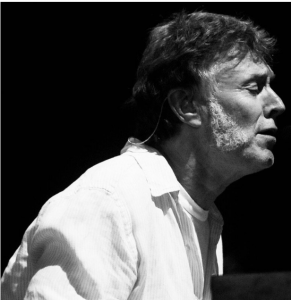 Ambling out to their instruments at 7:30 p.m. sharp with Winwood wearing a green plaid shirt and sporting grey mutton chops, the audience could be forgiven if they thought it was the tech crew arriving to conduct a warm-up sound check.

It was only after Winwood positioned himself at the B-3 organ and began the first notes of “Secrets” that the show was on, and the former Traffic leader and key Spencer Davis Group member kept it jammy and low-key.

Throw in the more recent nod to “Higher Love,” and Winwood had the crowd groovin’ for an hour with his soulful voice and his band’s chops.

Not quite Rod Stewart’s approach, but Winwood proved he could provide a few kicks of his own at about a quarter of the stage set budget.

Still, one gets the impression that even if Winwood continues to enjoy performing past his current age of 65, Stewart will be the one literally running circles around him . . . even when he hits birthday No. 80.

Be the first to comment on "Rod Stewart’s still got charm and energy to spare: concert review"