Special To The Hamilton Spectator

TORONTO:  In 1994, Robbie Robertson embraced his Native heritage with the documentary soundtrack album Music For The Native Americans.

He continues the exploration of his roots with his latest album, Contact From The Underworld Of Red Boy — released this past Tuesday — but says that this album is much more personal.

“It isn’t a sequel to me, because I really had two different objectives going on here,” an animated Robertson said Tuesday while relaxing in a chair in a Toronto hotel room.

Sharply dressed in a navy blue suit, the former Band leader was in his hometown to promote the new album and for an appearance at the Aboriginal Achievement Awards, which will be taped tonight (Thursday) and aired on the CBC March 26 at 8 p.m.

“For Music Of The Native Americans, I was really honoured to be asked to do that. It allowed me to open this door, and go to this place in a dignified way, but I had to make it emotionally work to that documentary.

“It struck me that although it was a great experience, there were more confinements and stipulations. With Contact From The Underworld Of Red Boy, there are no stipulations. I really got to do what I wanted to do: to go much deeper into the bush, and reach much higher into the sky, go further into the underground. I felt I really had a chance to pull out all the stops of what I’ve been carrying around with me my whole life.”

Much of his early life centered around infrequent visits to the Six Nations Reserve near Brantford. That was where as a boy Robertson, now 54, fell in love with music and learned to play guitar from the relatives on his mother’s side, the Mykes. It was where Robertson returned for inspiration.

“I started the process by going back to Six Nations,” said Robertson. “I went over the mountain there, and that just kicked things off for me.

“I just wanted to see everybody that I could. I wanted to visit, pay my respects, and even get a blessing for going into this project — feel where this all began for me. I thought it was the right medicine for going in and doing this record.

Robertson also brought a film crew with him this time as well, and last summer’s visit was immortalized in the upcoming PBS documentary Robbie Robertson: Making A Noise, scheduled to air later this month.

“This time I went back and I met with all the chiefs, and I went to social things, and there was a ceremonial going on at the time,” recalls Robertson. ” They did an honor dance for me. I saw my relatives, old friends, and I visited the old haunts.”

It also gave Robertson the opportunity to thank relatives Herb, Doug and Fred Myke for the guitar lessons. Eventually his six-string prowess earned him a spot in Ronnie Hawkins’ Hawks in 1960, setting the stage for the eventual formation of The Band in 1965 and an innovative musical legacy that continues with the new album.

But it all began with the Mykes at Six Nations.

“It was great to go back and acknowledge them, right to them, on film, that they were the people that turned me on. My cousin Herb talks in the documentary about when I was a little kid, me trying to play the guitar and him saying, `He’s not very good, you know? But he was trying,'” Robertson laughs.

He also says he had another mission in recording Contact From The Underworld Of Red Boy: he wanted to shine the spotlight on his culture. 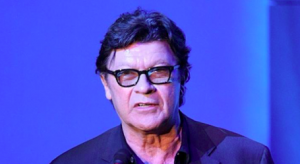 “There’s something about it being 1998, that it’s just more open now,” Robertson explains. “That whole world isn’t quite as private, or secretive, or sacred.

“In this music, a lot of things that I’m inspired by on this record are pieces of memories and sounds I’m using. This is the real underground music of North America. It’s always over behind that hill, or behind those trees, or down in that canyon or something. It’s never been in the forefront. So I feel this obligation — a good obligation — that I just want to push this to the surface a little bit, turn some people on.”

Robertson, whose array of special guests for Contact include Sadie Buck and The Six Nations Singers as well as Chief Jake Thomas, also incorporated the rhythm expertise of British DJs Howie B. and Marius De Vries into the appealing mix of traditional and contemporary.

“I chose Howie because of musical instincts,” he says. “For a few years now I’ve been hearing stuff he’s done, and there’s something about my experience and my ear that told me that I thought he would have the right sensibility.

“This is part of my heritage, and I have to be very respectful and try to do something enlightening. I didn’t want to pretend this was something from some other time. I wanted to present it right in the light of today, because that’s the most honest way I could do it.

“So him and Marius De Vries and this young guy, Tim Gordine, I chose them because they got it. They knew where I wanted to go with this thing.”

Robertson says Contact From The Underworld Of Red Boy is a gift to be shared.

“In Indian country, when somebody gives you a gift, your job is not to hoard it. Your job is to share it with other people and pass it on. So I’ve finally understood that, I’ve finally learned how to do that, and that’s what I’m doing.”