AS APPEARED IN THE KITCHENER-WATERLOO RECORD ON JANUARY 20, 1998

In fact, the ubiquitous NRBQ like to keep things so spontaneous that they don’t even bother to write out a set list before they go onstage. 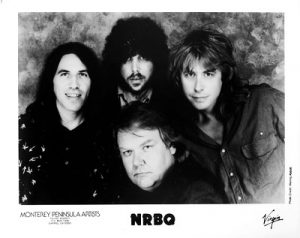 “We like to think that when we go out there, we don’t have a plan,” bassist and NRBQ co-founder Joey Spampinato said from his Nashville home last week.

“We don’t know what songs we’re going to do except for the very first one. We’ll say, ‘Okay, we’ll do this first ,’ and from there Terry (Adams) will call the set as it goes along.”

It’s a formula that’s worked for most of NRBQ’s 30 years — a telepathic mode that keyboardist Terry Adams, bassist Spampinato, his guitar toting brother Johnny, and drummer Tom Ardolino have refined on their way to nurturing reputations as musicians’ musicians.

No genre exists that NRBQ hasn’t mastered. Over 25 albums, the band has run the gamut from New Orleans funk and softcore rock to blazing country and even classical. They’ve even forayed into children’s music with their latest studio album, You’re Nice People You Are.

And NRBQ is more than willing to experiment in front of a live audience, offering themselves and their reputed 500 song catalogue as sacrificial guinea pigs all in the name of fun.

“Even if we play a song a million times — and it might be an old song, we try to play it with a little something — maybe a little edge it hasn’t had before,” Spampinato explains.

“That’s what keeps playing old songs alive. During that night’s performance we’ll do something crazy to it, and I think that maybe the people who like us, like us for that reason. We do something different all the time.”

Some famous self-confessed “Q”-Heads include Paul McCartney, Keith Richards, Bonnie Raitt, T-Bone Burnett and Elvis Costello. Many of them have requested Spampinato to jam, gig and record with them.

The Rolling Stones‘ Richards hired him as part of the all-star band to back up Chuck Berry in the rockumentary Hail! Hail! Rock ‘N Roll! and then drafted him for his 1988 solo album Main Offender. Eric Clapton invited him to participate in six of his annual 24 Nights stand at the Royal Albert in London.

Even Terry Adams boasts an eclectic outside resume, gigging with everyone from experimental jazz orchestrator Carla Bley and alternative rockers Half Japanese to the great Ms. Raitt herself.

“There have been some real treats along the way,” Spampinato acknowledges. “It’s nice when people keep us in mind and think to invite us.”

But over the three decades that NRBQ has seen its timeline run uninterrupted, one accomplishment has eluded them.

Joey Spampinato says the band’s 1978 live album At Yankee Stadium, their sole release for the Mercury label, still stands as the most requested by fans. But NRBQ has never enjoyed a runaway smash, let alone a Top 40 single.

The 49-year-old Spampinato is still hopeful.

“Sure we’d like a hit. That would be great,” says Spampinato, whose band averages 150 dates a year.

“Something like that frees you up. We love to play. When we record, we’d like to be free of thinking about going on the road. When you have a hit, you’re not pressured so much to do everything all the time.”

A year later, they relocated to New York, signed with Columbia and released two albums, including a project with Carl Perkins — who died yesterday at the age of 65 — called Boppin’ The Blues. They’ve since recorded on a half-dozen labels, and with other guests. Their 1985 effort She Sings, They Play featured Spampinato’s ex-wife Skeeter Davis. Two years later, wrestling manager Lou Albano fulfilled both handling and duet duties on Lou And The “Q”.

After they were dropped from Columbia, Gadler dropped out of the group and NRBQ became a quartet. “Big Al” Anderson joined in on bass in 1971, departing only four years ago to devote his time to developing his craft as a Nashville songwriter. Drummer Ardolino replaced Staley in ’74, and upon Anderson’s departure, Johnny’s brother Joey filled the guitar chair.

With Johnny’s arrival, older sibling Joey admits that the band’s vast 500 song repertoire may be a historical relic.

“We can’t play every song that we used to play. Al sang a lot of them, so I inherited some of those vocals, but some of them we just don’t do anymore. Instead of trying to retrace all our steps, we’re trying to move on.”

Up next on the NRBQ horizon is the re-release of their 1983 album Tap Dancin’ Bats on Rounder, a new live CD and another of their infamous Moonpie Fests, which involves six full sets over a single weekend from the band and plenty of flying marshmallow pies.

Joey Spampinato says there probably won’t be any moon pies at Mrs. Robinson’s Thursday night, but NRBQ is still going to have a lot of fun.

“You just never know what’s going to happen,” he says. “We kind of roller-skate into the thick of things.”