I
Entertainment / Music
Rihanna at the ACC: Barbadian pop queen capable of so much more
Her performance during the first of two nights at The Air Canada Centre was anything but a gem.

Rihanna lacked intensity and emotion during the first of her two shows at the ACC, says reviewer Nick Krewen.

Rihanna’s latest world tour may be called Diamonds, but her performance during the first of two nights at The Air Canada Centre was anything but a gem. 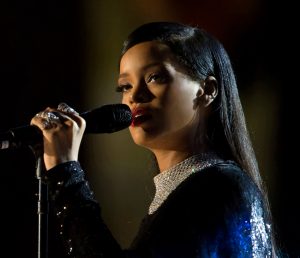 Starting just after 10 p.m., following the opening set by New York rapper A$AP Rocky, what should have been one of the more brilliant live performances of the year – after setting a decent standard with her Loud tour – was little more than a 100-minute hot mess, albeit with flashes of greatness.

The Barbadian pop queen, supporting her latest album Unapologetic, seemed to be suffering little of the after effects of a combined flu bug and laryngitis episode that forced her to cancel dates in Boston and Baltimore last week.

So there must be another reason why – for the first four songs and 15 minutes – Robin “Rihanna” Fenty did a lot more dancing than singing, relying heavily on her two backing singers to fill out some of the verses and choruses of such numbers as “Talk That Talk” and “Pour It Up” as she shimmied the night away.

It might have been another matter altogether had the choreography been halfway decent, but Rihanna’s dance moves were amateurish at best, and unbelievably sluggish.

And this was with the help of 10 synchronized, similarly garbed dancers who capably followed their instruction, but just didn’t inspire.

With the exception of a bit of dramatic license with “Rockstar 101,” Rihanna herself seemed to lack any intensity or emotion. Certainly her four accompanying musicians – including Extreme’s Nuno Bettencourt on guitar, remember him? – provided solid electric support, though their cause wasn’t helped by a largely muddy sound mix.

Frankly, this is a show that should have succeeded on every level, from the three-dimensional art museum screen set and the humongous circular stage, to the 28 full and partial renditions of hits like “Rude Boy” and “Umbrella” and the explicit sexuality of the one-track theme that seems to dominate the majority of Rihanna songs from “Birthday Cake” to “Cockiness (Love it)” or “S&M.”

When this reviewer witnessed the Loud tour, Rihanna possessed magnetic charisma, sang her heart out and executed a number of theatrical vignettes that ideally suited her muse.

With the Diamonds tour, she comes across as a second rate Madonna and a rather flat one at that.

Maybe she needs to take a bit of a hiatus and regroup. When Rihanna did shine, it was thanks to the strength of the song rather than the elation of her performance.

And we all know Rihanna is capable of so much more.

Be the first to comment on "Rihanna at the ACC: Barbadian pop queen capable of so much more"