For its pair of Canadian Music Festival appearances at Lee’s Palace and the Church Of The Holy Trinity Thursday, Regina’s Rah Rah will be down a man.

When contacted at SXSW last week, Marshall Burns — one of the indie band’s three co-founders, singers and songwriters — confirmed that guitarist Leif Thorseth is currently missing in action, albeit temporarily.

“He just couldn’t do this tour,” Burns offered by way of explanation. “We miss having him around, just personally and in the band. But there’s always a silver lining: we’ve been working as a five-piece band and reinterpreting the songs, and I’ve been doing a bit more of the guitar duties.
“It’s been an interesting exercise.”

Rah Rah, which started out in 2005 as a trio with Burns, drummer and singer Erin Passmore and Kyrie Kristmanson (who has since departed) before expanding to a sextet, is pushing its third album The Poet’s Dead. 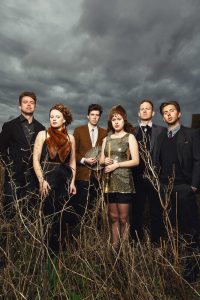 Produced by Gus Van Go and Werner F., Burns says it’s a more cohesive project than 2008’s Going Steady and 2010’s Breaking Hearts thanks to some production suggestions on the songwriting process.

“They really pushed us to practice a lot more and spend time on things that we used to skip over, like trying different arrangements or really sitting down with lyrics and working them out.
“It took longer, but it paid dividends.”

Burns said that a powwow between Rah Rah’s three principal writers forged a mutual understanding.
“In the past, ideas were a bit more all over the map,” he admits.

“This time, Erin, Kristina (Hedlund, violin, keyboards, vocals) and I sat down and talked about what the main themes of the record were going to be lyrically, what we were trying to say, and attempted to fashion some different ties between our different songs.”

One thing The Poet’s Dead has accomplished is distance the comparisons to Arcade Fire, although Burns says he takes it as a compliment.

“Of course, we’re trying to put our own mark on whatever we’re doing,” says Burns, whose band has just begun a Canadian tour with Two Hours Traffic.

“But you’re always going to reflect your influences in one way or another.”

Be the first to comment on "Canadian Music Week: Hard work paying off for Rah Rah"