Canadian Music Week: The White Buffalo in town for Great Hall gig
Folk and country singer has had six songs featured on hit TV show The Sons Of Anarchy

If you’re a fan of The Sons Of Anarchy, you’re probably aware of The White Buffalo’s music.

The California native, who is also known as Jake Smith and currently calls Los Angeles home, says he’s grateful for the exposure on the gritty TV series about the inner politics of a motorcycle gang, figuring that the public reach and credence it’s given his career has been incalculable. 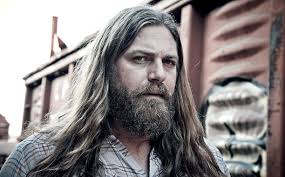 “I’ve had six songs on that program, and that has hooked quite a lot of people for me, which is great.”
It’s also given Smith, who appears solo Wednesday night at the Black Box Theatre at the Great Hall as part of the Canadian Music Festival, a silent hand in determining his career path, which was, until he signed with Unison Music a couple of years ago, exclusively his own.

“I’ve been doing it for a long time,” he admits, noting that he had an album and a couple of EPs before being signed and releasing his latest project, Once Upon A Time In The West.
“I just worked hard and stayed touring. But before that, it was all word of mouth, the live performances and the connection that people have to the songs.
“Even with the Internet, it’s been through word-of-mouth. There hasn’t been much of a team.”

Case in point: a performance last summer at the Dakota Tavern during North By Northeast that found folks not only filling the joint, but singing along with many of his intense acoustic-driven folk-and-country-charged ballads.

“It was pretty surprising because I didn’t know what kind of juice I had in Toronto,” Smith admits. “It was kind of my second time playing my own show at all. And I hadn’t put much face time there.”

Gifted with a tenor vibrato that is at times reminiscent of Pearl Jam’s Eddie Vedder, and a grounded view of raucous soul-searching that makes its way into songs like “BB Guns and Dirtbikes” and “A Good Ole Day To Die,” Smith says his songwriting mandate is a simple one.

“I think the whole point of writing songs is to either move somebody emotionally or take them on a journey.”

Be the first to comment on "Canadian Music Week: The White Buffalo in town for Great Hall gig"