Being ignored at home was the best thing that ever happened to England’s Radiohead.

Unlike other Johnny-come-latelys of the British pop scene, the five members of Radiohead weren’t former plastic surgeons who got bored with their professions, nor are they the byproduct of some horrible laboratory accident.

They’re simply a handful of normal school friends from Oxford who practiced in a rehearsal room for five years, and got lucky. They signed with Parlaphone, released an album called Pablo Honey, and were totally ignored by the British press.

Then they got really lucky. In 1993, the song “Creep”, with its beguiling melody, reticent delivery and mesmerizing “I’m so special” catch phrase, became a top ten hit in North America. Suddenly everyone — including England — wanted Radiohead.

“It gave us a big hammer for a while,” admits Thom Yorke, Radiohead’s singing songwriter who bears an uncanny resemblance to comedian Martin Short under a thatch of blond hair.

Sitting alongside bassist Colin Greenwood at a Toronto hotel, the 26-year-old Yorke describes “Creep’s” success as “the biggest high known to man.”

He also confirms it overshadowed the band’s other work on the Pablo Honey album.

“The only way to get past the song was by throwing ourselves into all the songs,” says Yorke. “The bizarre thing about it is we were thinking of putting out a live version of Pablo Honey. Within six months of recording the album, we were playing every song better.”

While the seemingly endless tour schedule — 350 dates including several trips to Canada and the U.S. — paid off in honing the performances of Yorke, Greenwood, guitarist and keyboardist Jonny Greenwood, guitarist Ed O’ Brien and drummer Phil Selway, “Creep’s” prosperity ended up posing problems for Yorke when it came time to write Radiohead’s new album The Bends, out this week.

“The main restriction was one of overwhelming confidence, and then a complete lack of confidence,” says Yorke. “The song’s success created a sense of supply and demand that restricted the way I was writing. It was good in that we had a lot to prove, but knowing you have a lot of prove can also completely stifle your creativity.”

It’s obvious that the roadblock was temporary, for The Bends contains the first-rate stylistic diversity that has come to define Radiohead’s global appeal. 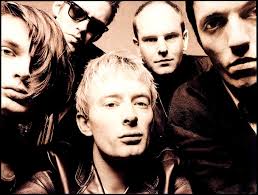 “It has always been that way,” says Yorke, whose band will tour this summer.

“We get to a place where we think we should find something more cohesive, and then we end up going the opposite way. When we finally realized that for definite, it was really liberating. We take each song as it comes.”