PUBLISHED IN THE HAMILTON SPECTATOR APRIL 27, 1995

Mike Watt, the legendary the bass-playing linchpin who anchored San Pedro underground collage masters Minutemen for six years and followed it up with flannel rocking fIREHOSE for seven, has named his first solo album after one of his favorite armchair hobbies: wrestling. 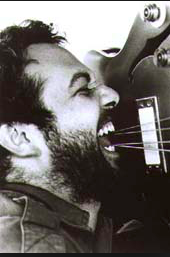 “It’s the only TV I watch, besides Soul Train,” said Watt, recently in Toronto to promote Ball-hog Or Tugboat?.

“If you can’t believe in wrestling, then what can you believe in? The raps are way more important than some of the fights. I think wrestling is a good metaphor for my talent, especially for this record. I was afraid of the idea of calling it a solo record. I’m the bass player, the rudder man.”

Watt freely admits he threw his fans a curve ball.

“In my personal experience, I played with four people the whole time,” said Watt. “Then I thought, why not try to do something that’s radical for me: try to play with everybody I know.”

As many of the guests on his album, the 37-year-old Watt is enjoying a popularity with the masses he never expected when he first began his career.

“It is bizarre, ” Watt concedes, “I never thought this music would have got big. We were misfits.”

Initially a fan of Blue Oyster Cult and The Who, Watt was a 12-year-old teenager in San Pedro, California when he first picked up the bass with pal Danny (D.) Boon on guitar. Ten years later, the duo joined drummer George Hurley and another guitarist to form the Reactionaries. Later in 1980, the Reactionaries became a trio and changed their name to Minutemen, inspired by British minimalist art band Wire to abandon the verse-chorus formula and perform songs that initially lasted 60 seconds.

“To me, punk was our own little private joke on the world,” explains Watt. “You got to meet the other weirdos. We wanted to unite the other weirdos. That’s why we toured. We thought there were people like us in every town. The fanzines, the records, it was like this little community we built.

“The really neat thing about punk is that you were in charge of everything. You could invent your own celebrity, and you couldn’t blame it on anybody, except yourself. We never understood punk as a haircut or a guitar style. We were all reinventing it for ourselves.”

After releasing five EPs and seven albums, Minutemen’s career was tragically halted in December 1985 by the death of Boon in an Arizona van crash. Almost a decade later, Watt deeply mourns the loss.

“The only reason I’m in music is D. Boon. When you hear my bass style, there’s lots of D. Boon in there. He came up with this idea of playing at the top, with me playing the middle and Georgie on the bottom. He didn’t think the guitar was over bass in terms of importance.

“I never thought D. Boon could get killed. The guy was built like a tank.”

In 1986, a trumpet student and Minuteman fan from Ohio, Ed Crawford, badgered Watt into starting a new band with Hurley, and fIREHOSE was born, with Crawford on guitar.

“I’m forever grateful to Edward for getting me out of my house when D. Boon got killed,” says Watt. “But I pulled the plug on fIREHOSE after seven-and-a-half years, 900 gigs and six albums because I thought it was time.”

Although bands such as Green Day and Offspring are being criticized for jumping on a perceived retro-punk bandwagon, Watt doesn’t share the sentiment.

“They’re kids. I don’t think it’s nostalgic for them, because they’re not really old enough. It’s not like they’re thinking back.”