Swagger and a hot seven-piece band were the two most defining moments of Pitbull’s 90-minute set at the Molson Amphitheatre Wednesday night.

That and a hot seven-piece band were the two most defining moments of Armando Perez’s — or Pitbull, as we generally know him — 90-minute set at the Molson Amphitheatre Wednesday night.

Dressed head-to-toe in an expensive black suit, the Cuban-by-way-of-Miami crunk rapper displayed a charismatic confidence that was undeniable as he revved up the crowds to engage in his particular brand of dance music. 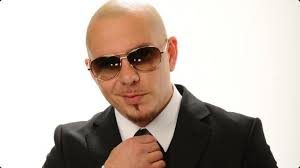 “Raise your hands in the air!” he barked repeatedly, inciting the 11,000 or so that came to see him and co-headlining trashy pop queen Ke$ha on a chilly late spring evening by the lake, into action.

The predominantly female crowd turned the venue into a gigantic dance party, with the smiling, sunglass-adorned Pitbull cheering them on, sometimes jumping on the spot, sometimes mixing it up with his four female dancers, and sometimes just grooving to the impossibly ear-splitting accompaniment provided by his crackerjack band that included two drummers and an occasional saxophonist, although you never really heard the sax due to the music’s excessive volume.

Although he certainly did provide his fair share of rapping on a set that relied heavily on his two most recent English-language albums Global Warming and Planet Pit, Pitbull allowed many of his celebrity duet partners — Jennifer Lopez, Christina Aguilera, Usher and Marc Anthony among them — take up the slack through gigantic video screens.

That wasn’t the only thing that was borrowed: Pitbull’s music also copped a lot of hit riffs directly from the source, incorporating Guns N’ Roses “Sweet Child O’ Mine” as an entry point into “Don’t Stop The Party” and also challenging Toronto to “fight for their right to party” before the Beastie Boys video of the song entertained for a couple of minutes.

Hits like “International Love,” “Get It Started,” “Hotel Room Service” and “Give Me Everything” seemed to thrill the crowd, but it was the Spanish-language segments — “Echa Pa’lla” and “Bon, Bon” — that gave the concert a tropical flavour and transcended the rest of the show.

As much as Pitbull borrowed from his set, at least he didn’t outright steal an idea, as Ke$ha managed to do when she blatantly pilfered the look of San Francisco art band The Residents for her song “C’mon.” 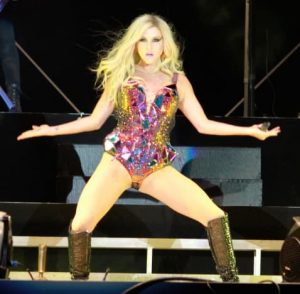 Toward the end of her hour-long set, she made a comment about liking eyeballs, and who should suddenly appear, but her six accompanying dancers suddenly dressed in eyeball helmets, top hats and tuxedos as they shimmed around the stage.

Aside from that visual rip-off, Ke$ha’s performance couldn’t have provided a bigger contrast in content or style. While Pitbull is all about the partying, Ke$ha is more about partying in a more biblical manner, a multiple-costumed façade of dance-oriented pop where she espouses individuality and comes across like a low-rent Lady Gaga or a Madonna wannabe.

The crowd reaction to her was also amusing: they would be readily engaged in hits like “TiK ToK” and “We R Who We R,” but the moment she stopped performing, there would be silence — none of the continuous frenzy you’d expect from a hit artist of her stature.

Perhaps Ke$ha’s 15 minutes are even closer to expiration than she realizes.

Be the first to comment on "Pitbull and Ke$ha get Toronto crowd dancing: Review"