Kids on the Block, Boyz II Men and 98 Degrees deliver a satisfying night of pop at the Air Canada Centre on Friday, Nick Krewen writes.

Turns out that you can teach a New Kid some old tricks.

The last time the former boy band from Beantown, — New Kids On The Block — were in Toronto, they was sharing the stage with their unintentional protégés, Backstreet Boys, in 2011.

And that stage stretched all the way into the middle of the Air Canada Centre.

Forward to Friday night at the same venue, and the 25-year-young combo of singers Jordan Knight, his brother Jon, Joey McIntyre, Donnie Wahlberg and Danny Wood obviously took that lesson to heart, as the main stage was located once again in the middle of the arena.

Older New Kids On The Block

Great for sightlines and slapping the fans’ hands, perhaps, but it’s almost ironic that the NKOTB modus operandi is now accessibility, considering much of their stardom was built on inaccessibility: being just out of reach of their frenzied female fan base, and fuelling the hormones by keeping the fantasy separated from reality.

The new New Kids attitude, though, is a touchy-feely, intimate reality, prompted by a stage shaped like a baseball diamond that enabled the quintet to reach out at whim to lay their hands on their admirers, 95 per cent of whom, in Toronto, were female.

When “Tonight” rolled round, NKOTB left the stage and each member wandered into the crowd, getting up close and personal with swooning audience members in their mid-30s and 40s, many of whom could have only dreamt of this moment a quarter century ago.

Especially the shocked blonde who had her lips locked in a prolonged kiss from Wahlberg.

Almost more shocking is how seasoned NKOTB have become as performers. Aside from the usual bells and whistles like balloons, streamers, rising hydraulic platforms, open flames and lasers, the quintet offered the right balance of tease ’n’ please. As they sang their sappy puppy love sentiments, Jordan Knight noodling around with his falsetto, both he and McIntyre would occasionally pause what they were doing to stretch the applause and cheering out for a pinch longer.

Or they’d be singing a sweet platitude like “Valentine Girl” and the shirts would be slowly hiked to reveal admirable abs. It was a shtick, but an effective one, balanced by fancy choreography that was never overdone and suited the occasion.

They rolled out some new material from their latest album, 10; strolled down memory lane for hits like “The Right Stuff,” “Step By Step” and “Please Don’t Go Girl;” threw in some unexpected covers ranging from Prince’s “Kiss” and Nelly’s “Hot In Herre” to George Michael’s “Faith,” and called Toronto “our home away from home” with enough sincerity that you actually believed them. (For the record, Wahlberg was pulling your leg when he mentioned the Knight Bros. were from Toronto).

It’s likely that the most of estimated 14,000 in attendance were holdovers who taped Tiger Beat posters of various NKOTB members to their bedroom walls and lockers and, for them, the show was nothing short of perfect.

And the first two acts also gave them something to cheer about: Philadelphia soul crooners Boyz II Men, who have shrunk by a member since their heyday but delivered such massive hits as “I’ll Make Love To You” and “End of the Road” — and the Nick Lachey-led 98 Degrees, whose hit repertoire has been mainly penned by Canadians like Sean Hosein and Dane DeViller (“Invisible Man”), former Torontonian Justin Gray (“Impossible Things”) and our own Dan Hill (“I Do (Cherish You).” 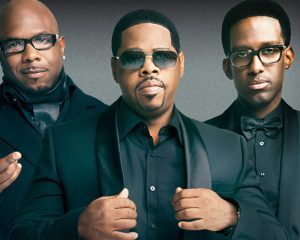 Overall, a satisfying night of pop from the triple bill, who return to the ACC on July 28 to do it all again.

Be the first to comment on "New Kids On The Block: Concert review"