Backspacer, the new album out today from Seattle rock icons Pearl Jam, finds the band in a dramatically different headspace.

Nick Krewen
Special to the Star,
Published on Sun Sep 20 2009
Backspacer, the new album out today from Seattle rock icons Pearl Jam, finds the band in a dramatically different headspace.

Oh, the aggressive energy crackling of the speakers from such fist-pumping sonic blasters as “The Fixer,” “Got Some” and “Supersonic,” is vintage Pearl Jam, all right; a blazing scramble of electric guitars and driving beats fuelled by the high-octane chemistry of Eddie Vedder, Mike McCready, Stone Gossard, Jeff Ament and Matt Cameron fused as one.

But if you’re expecting the socio-political punch of a “World Wide Suicide” or an “Even Flow,” those types of topics are conspicuously absent on the 11-song, 36-minute Backspacer. 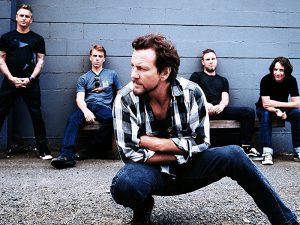 Instead, singer Vedder – perhaps inspired by his recent soundtrack solo foray for the Sean Penn film Into the Wild – has dialed back the lyrical politics, favouring words that are big-picture philosophical, personally romantic (“I’m a lucky man to count on both hands/ the ones I love”) and, in songs such as “Just Breathe” and “Force of Nature” – dare we say it – optimistic.

In fact, the band’s ninth studio effort (or 94th overall album, if you include compilations and officially released live CDs) portrays Pearl Jam in a surprisingly sunny and grateful mood, according to bass player Ament and drummer Cameron. Life – the music, the shows, band relationships and time spent with family – is peachy.

“I really think so,” says Cameron, 46, relaxing on a Molson Amphitheatre green-room couch with Ament before last month’s sold-out concert. “Most of us have families, and that’s been a godsend for a lot of us, because a lot of times when you’re in a successful group, you can get kind of narcissistic and just think about yourself all the time.

“It’s nice to let that go and think about your kids. And I think it can have a really positive effect on your overall outlook on life, you know?”

Adds Ament: “We can still bring it live the way that we did when we were young to some degree, so we’re in that sweet spot right now.”

Since they’re no longer on a U.S. label, the band also enjoys artistic and marketing carte blanche. This has led to a controversial retail agreement to stock physical copies of Backspacer exclusively in the U.S. with Target. (In Canada, Backspacer is on Universal Music Canada with no retail exclusions.)

Creatively, this sense of freedom was further invigorated by the return to the production chair of the Grammy-winning Brendan O’Brien for the first time since 1998’s Yield. 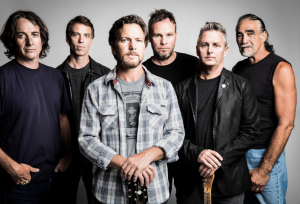 It was O’Brien who helped Pearl Jam engage in a practice apparently absent from previous releases: preparation.

“We’ve always known what Brendan’s strengths were, how he likes to make records, and in talking to him early on, we decided we wanted to have the songs together before we went into the studio this time,” says Ament, 46, one of Pearl Jam’s co-founding members with Vedder and guitarists Gossard and McCready.

“So consequently we made the record really, really fast. We had the basic tracks down the first 10 or 11 days. Then it was up to Brendan and Ed to work their magic and kind of finish the songs off – and they did that really quick, too.

“It made for a more concise, less fatty record – a great way to make records,” Ament says, beaming. Ament said that O’Brien’s objective was simple. “He said he wanted to make the best Pearl Jam record that we’d made up to that point.” Cameron said O’Brien also served as the catalyst for gathering band instrumentalists at Ament’s Montana homestead prior to Vedder setting foot in the studio.

“One of his ideas was to get together in the writing stage a bit before Ed was brought into the fold. We wrote a lot of instrumental music we eventually finished up with Ed.

“It was a really great way to work. On the last record (2006’s Pearl Jam), we had a lot of music that Ed tried to write lyrics for, and I think that might have overtaxed him to a certain degree. This time, everything was super focused.”

The quick and confident execution on Backspacer spurred Vedder’s own spontaneity, notably on “The Fixer,” the rousing single that both fans and radio stations have embraced.

“I think he really trusted his first instinct,” says Cameron. “If Ed came in and we were working on a song, he would go right up to the mic and I remember, with both `The Fixer’ and `Got Some,’ those lyrics came instantly …

“I think that’s probably a lot of the reason the record’s so positive. When he started singing `The Fixer,’ we thought, `Man, this is going to be something special.’ You just knew.”

Ament says Pearl Jam, which has sold more than 30 million records, started to build toward this artistic crescendo with the arrival of Cameron as a full-time contributor for 2000’s Binaural. “When Matt started to make a lot of the songs his own, he loosened up and we started to trust each other more.

“That to me was the first time, maybe even ever, that it really felt great on stage. And I think this is the first record we’ve made where I felt like everybody was really pumped. So, in some ways, it really has all come together right now – live, making records.

“We’re already talking about making the next record, and how stoked we are. And we’re making it with Brendan obviously – although he doesn’t know it yet.”

Be the first to comment on "Pearl Jam’s gem"