Matthew Good isn’t afraid to wear his heart on his sleeve. West-coast musician and activist Matthew Good, 38, has a reputation for being outspoken about social problems. With ‘Vancouver,’ his eighth album of original material in 14 years, Good is true to form.

Matthew Good isn’t afraid to wear his heart on his sleeve.

On Vancouver, in stores Tuesday, he’s wearing his home on it as well.

Either way, he’s not mincing his words, notwithstanding the fact the upcoming Winter Olympics have raised the profile of his hometown.

“I use the city primarily as a backdrop and my own personal history in terms of living in the city is implied over top of it,” Good, 38, explains in reference to the title and contents of his eighth album of original material in 14 years. 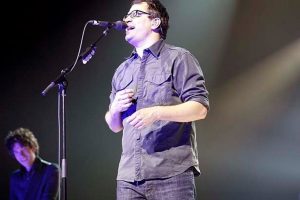 “Of course, there are several instances of where I talk openly about social problems – and other parts of the record where I talk about the transformation of the town from maybe having more of a soul than it does now.”

Nowhere is he more blunt with his assessment than on “The Vancouver National Anthem,” a song featuring Pete Yorn on harmonies. The arrangement builds tension with a blazing guitar riff as it lyrically decries the apathy of an increasingly upscale neighbourhood ignoring its homeless problem with the haunting words, “We all live downtown/We all die downtown/Step over ourselves.”

“There are certain songs where I’m very direct, and that is the most direct song on the album,” says Good, who blogs about current affairs at matthewgood.org. “That song is very much about the hypocrisy within Vancouver in which you can take a cab from this nation’s poor urban neighbourhood to one of its wealthiest in seven minutes.

“And the fact that even with that neighbourhood, the Lower East Side – I’ve lived there the last three years, right off of Hastings and Carroll – the gentrification has been stunning and has been done in such a forceful way. It could be because of the Olympics. It could be because in a city that’s on a peninsula, you run out of prime real estate pretty quick, and you have to expand somewhere. So it’s either/or.”

Not all Vancouver songs are about the city: On “The Last Parade,” Good sings of “a small town where people have lost their jobs, and they have their last antiquated parade,” and “A Silent Army in the Trees” is an astute commentary “on how influenced we are by militarism at a young age without being ever exposed to its realities and that, when we are, a harsh truth is learned.”

His search for truth first drew Good to public attention in 1995 with the independent Last of the Ghetto Astronauts.

Anthems about cultural obsession (“Apparitions”), medication-fuelled ADD (“Hello Time Bomb”) and the capacity for self-destruction (“Weapon”) have found him to be a lyrical mastermind when it comes to astutely deconstructing social and personal psyches, a consistent ability that fuels his uniqueness among Canadian songwriters.

It’s a gift that the candid Good refuses to censor. “As an artist I believe that if you are true to yourself you don’t shy away from personal revelation,” he notes. “It’s something that is ever present and that I don’t have control over.”

Witness 2007’s Hospital Music, a collection of songs emanating from a breakdown he suffered that was triggered by the shock of an unexpected divorce.

It led to Good being diagnosed and properly treated for Type 2 bipolar disorder, bringing him some much-needed relief and peace of mind.

“For me, it was such a massive epiphany,” Good declares. “For years, I had always wondered what was wrong. I never did drugs. I didn’t drink from the age of 20 until I was 31.”

Good’s ordeal also opened his eyes to the state of mental health treatment – and the plight of the homeless who go untreated.

“We put people into an environment in which they can’t take care of themselves, and the structure of that environment is set up to prey upon them as soon as they step out the front door of whatever slum hotel they’ve been set up at.”

Good says charities can only do so much. “It’s not the ability of throwing a million dollars at the problem. We have to look at the problem from a human level.”

Good, who will wind down his 34-date Canadian tour to promote Vancouver with a pair of Massey Hall shows Dec. 18 and 19, is living a happier life these days.

He’s found new love, and admits his 2 1/2-old stepdaughter is the apple of his eye.

“She’s so precious to me,” says Good. “Although I have a nephew who is 12 and a niece who is 7, who I watched grow up, I’ve never really had the day-to-day experience of being a parent.

“I’ve never been awoken at 8 a.m. with a child sleeping on my head. I’m not opposed to it.”