Passenger returns to Toronto for Dec. 10 show at Phoenix.

It seems a female admirer handed him a bullet in honour of his new song “Bullet,” and he promptly packed it in his bag and forgot about it . . . until he flew from Berlin to Munich.

“I was minding my own business, doing a Sudoku in the lounge and suddenly there were these two police officers that wanted to have a chat with me,” said Rosenberg from his Brighton, U.K., home earlier this week.
“It was pretty scary, man, because for about 10 minutes I had no idea what they were talking about. They said I had firearms, and I had just jumped to a conclusion and thought somebody had planted a gun in my bag.
“After awhile, it turned out it was the bullet and once it finally clicked with me as to what it was, I told them a story that they thought was so ridiculous that they knew I wouldn’t have made it up on the spot.” 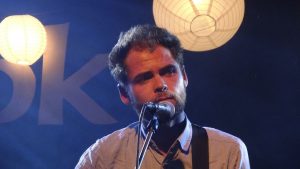 Undoubtedly the 1,100 fans filling the Phoenix Monday night to see Passenger’s first headlining set are breathing a sigh of relief, eager to see him reprise his intimate repertoire of the heart-wrenching, dream-crushing, humorous and, at times, hopeful folk songs that comprise his fifth album, All the Little Lights.
The one-man band made quite the impression earlier this summer at Echo Beach, charming the 5,000 people anxiously awaiting headliner Ed Sheeran.

It was also a performance where Passenger proved himself to be a demanding entertainer; politely and repeatedly requesting his audience to either sing along or keep silent during the more peaceful moments of his set, for ballads like the heartbreaking “Let Her Go” and the hilarious “I Hate,” in which he blames Facebook for “pointless status updates” and reality talent shows like The X Factor “for murdering music.”

“You can either get the crowd on your side or people can maybe feel a little pissed off by it,” he says. “I think with this kind of music, I know that it really works when the environment is right. In my opinion, I think it’s worth putting yourself out there and asking the crowd for certain things, because you know if that happens, it can go somewhere really special.”

And he admits he actually likes Facebook, relying quite heavily on it to connect with his admirers.

“I think it’s a real chance for artists to be very approachable and very real for people who listen to my music; to be able to contact me directly is very important to me, actually.”

Speaking of bullets, Rosenberg, 28, a busker who started off Passenger as a band before being forced to turn solo, has noticed a huge spike in his career activity, partially due to Sheeran’s camaraderie.

Since the 21-year-old frizzy-haired troubadour invited Rosenberg to go on tour — spotlighting him with an onstage duet as well as handing him the warm-up slot — Passenger has experienced a breakthrough.

“It’s all a bit weird, to be honest, because I’ve been playing music for 10 years, bashing my head against the wall for many of those years, trying to get a foot in the door,” Rosenberg explains. “These last six months it’s just gone crazy, not only in North America, but in Europe, where the single (“Let Her Go”) has gone to No. 1 in Holland and in Belgium.
“But I’ve been friends with Ed since he was about 15. We both played in this tiny, tiny basement in Cambridge years ago. We both watched each other’s set and we just hit a chord with each other.
“From then on, we kept in touch, and anytime I was in England the same time he was, we’d play a show together in London and just hang out.
“Since he’s exploded, he’s just been phenomenally generous towards me in support slots and tweeting my lyrics and doing all this stuff. He’s a pretty incredible guy at the age of 21 to be so thoughtful and generous with his position.”

Be the first to comment on "Passenger, a.k.a. Mike Rosenberg, grateful for Ed Sheeran’s support"