At 73, Ian Hunter is no longer a young dude. But that doesn’t mean there are times when he doesn’t feel like one.

At 73, Ian Hunter is no longer a young dude. But that doesn’t mean there are times when he doesn’t feel like one. 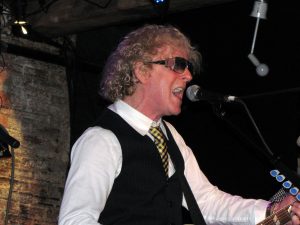 Still one of rocks’ most enduring and identifiable icons with his frizzy blond locks and ever-present shades, Hunter is continues to churn out albums since splitting from British semi-glam rockers Mott The Hoople in 1975.

More importantly, Hunter’s still writing and recording quality work, as evident by When I’m President, his 14th and latest solo album, some of which he’ll be performing on Dec. 7 at Lee’s Palace with his Rant band in his first Toronto appearance in ages.

It’s melodic, no-frills rock ’n’ roll fraught with lively energy and Hunter’s wry and sometimes poignant observations, with songs like the cheeky “When I’m President,” the rowdy “What For” and the philosophical “Life” revealing a man — whose popularity peaked with 1979’s memorable You’re Never Alone With A Schizophrenic — who is still at the top of his game.

Even the notoriously self-critical Hunter is content with When I’m President, which has been receiving a generous chunk of airplay on SIRIUSXM’s The Loft.

“I like the whole thing,” he admits from his Connecticut home. “There’s no filler, although that doesn’t seem to matter anymore, because everybody pays their 99 cents and goes for the one track. But I come from a place where the attention span would actually hold over the whole album as opposed to one track, and I still try and do that.
“You know — very often you can’t do it. There’s always one or two songs that sort of get flung on at the end, but this time around, every one of them’s strong. I don’t have any problem with this record. It suits me fine. I’m satisfied with it. I’m satisfied with the band on it. Everything.”

The title song seems to be especially timely: a man in a bar wistfully fantasizing about becoming the leader of the U.S. and expressing his desire to “lean on the 1%/When I’m President.”

Considering the album was released during Barack Obama’s re-election campaign, was there any thought to sending it to him as a theme song?

“I suggested it,” Hunter admits. “I don’t think anybody sent it, though.
“It was actually called ‘When I’m Superman,’ but then ‘President’ fell off the tongue better, so I just changed it and it coincided with the Obama thing.”

Had it struck that chord and landed in Camp Obama, it might have been one of the rare occasions that Hunter enjoyed a hit with his own music. His biggest songs have been hits with others: easy listening sensation Barry Manilow scored a Top 10 hit in 1979 with Schizophrenic’s “Ships,” spandex rockers Great White enjoyed their biggest success in 1989 with “Once Bitten Twice Shy” and alt-rock band Presidents Of The United States Of America covered “Cleveland Rocks” and it became the theme for TV’s popular The Drew Carey Show in 1997 from Seasons 3 through 9.

Ironically, Hunter’s big break came not with his own song, but with “All The Young Dudes,” a number given to Mott The Hoople by David Bowie when they were on the verge of first breaking up in 1972.

The Bowie-produced sessions for Mott’s All The Young Dudes album were important not only for giving the band its first taste of success, but reacquainting Hunter with Bowie’s Spiders From Mars guitarist Mick Ronson, resulting in a lifelong collaboration between the two until Ronson’s death from liver cancer in 1993.

Hunter, initially a bass player in a number of London bands in the ‘60s before joining Mott as a singer and songwriter in 1969, says he didn’t enjoy his occasional forays into stardom.

“It just got more annoying, really,” he recalls of the You’re Never Alone With A Schizophrenic days.
“Because if you have an album on the big side, you have to start having to plan things way ahead, which really didn’t thrill me. I’m slow as a writer. At that point I was slow. They wanted another Schizophrenic within a year, and it just wasn’t going to happen.”

In fact, Hunter describes writing as “one of those magical things.”

“The antenna goes up and what you get, you get,” he explains. “It’s true magic. It comes out of the air — probably a combination of that and a bit of DNA.”

At the moment, the Shropshire, U.K.-born rocker is concentrating on performing, promising a Toronto set of “a third new, a third me and a third Mott” before heading over to Europe next spring with an acoustic trio.

After that, is retirement in the cards?

“That would be a fate worse than death,” Hunter sniffs. “I can’t understand that at all. I don’t get it. What are you going to do?
“They have retirement homes now, where you buy a home in a retirement area at 55. At 55, you’re basically still 25. It’s just ridiculous.
“But I guess there’s a lot of people who like sitting around the kitchen going, ‘Oh my God,’ you know? I can’t do that. It’s boring.”

Be the first to comment on "Ian Hunter and Rant play Lee’s Palace Dec. 7"