Of Monsters and Men another Iceland hit | Toronto Star Iceland’s sextet Of Monsters and Men, led in part by Nanna Bryndis Hilmarsdóttir, top centre, sold out their visit to Toronton and made a surprise trip to the top of the iTunes Canada chart while doing so.

The number of successful Icelandic music exports that have had seismic impact in North America can be counted on a few fingers of a single hand. 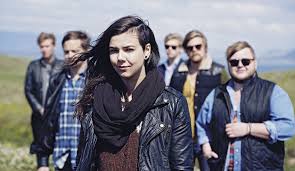 Of Monsters and Men

But with the rapidly growing popularity of the impeccably catchy and strident “Little Talks” — recently added to local tastemaker radio station The Edge’s playlist — and a string of sellout dates that included last week’s Toronto concert debut at The Phoenix, Of Monsters And Men are pushing to add to that legacy.

Hailing from Gardabaer —a town (pop. 10,909) that might be considered a small suburb of capital Reykjavik — Of Monsters And Men is a relatively new entity in the folk pop sweepstakes.

Sporting the one-two lead vocal punch of singer-guitarists in Nanna Bryndis Hilmarsdóttir and Ragnar “Raggi” Pórhallsson, the six-piece Of Monsters And Men is barely two years old, spawned by Musiktilraunir — which Hilmarsdóttir, holding court at the venue last Thursday, describes as “sort of a battle of the bands.” 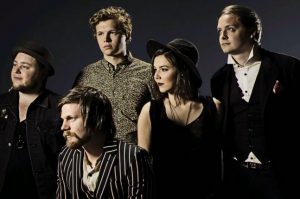 Of Monsters and Men

“You can’t be over 25 to enter, but young bands often go and form around this competition,” says Hilmarsdóttir, 22.

“We get a chance to play at this big venue with a lot of people and get some experience, and there are judges. But we wouldn’t have been a band if we hadn’t decided to form around this contest.”

Of Monsters And Men won the 2010 competition, and received studio time and ended up performing at the Iceland Airwaves festival, where a Seattle radio station taped their rendition of “Little Talks” and got the viral ball rolling, eventually leading to a deal with Universal Music and the recording of their first album, the Jacquire King-produced My Head Is An Animal.

If energetic songs like “Dirty Paws” and “King And Lionheart” conjure up sonic references to Montreal’s Arcade Fire or England’s Mumford & Sons, it’s not your imagination.

“They definitely were influences,” agrees Hilmarsdóttir, whose band is rumoured to be returning to Toronto in August.

“I like Mumford & Sons just because of the atmosphere the band creates and Arcade Fire have their own crazy vibe, this energy that you just want to embrace.

“Being compared to two great bands is flattering. We’re still our own thing, not the children of these bands, but we’re not terribly offended.”