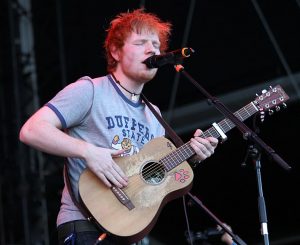 Ed Sheeran, opening a pair of shows for Snow Patrol at Massey Hall next week in what’s destined to be a contemporary role as a warmup act, isn’t afraid to apply a little elbow grease in working his way to the top.

In a seemingly short period of time, the 21-year-old acoustic-driven British singer and songwriter, who also has a predilection for incorporating hip-hop cadences into some of his pop and folk lyrical flow, as well as influences from Britain’s grime scene, has generated considerable buzz on this side of the Atlantic for his substantial output.

Although + (pronounced “plus”) — his breakthrough U.K. album that helped him capture a pair of Brit Music Awards back in February — won’t hit North American shelves until June 12, (a five-song introductory EP, The A Team, is out now), the Suffolk, England resident has been releasing product independently, dating back to his 2005 high-school days.

That would include two albums and eight EPs and 2012’s eight-song No. 5 Collaborations Project pairing Sheeran with grime staples Mikill Pane, Dot Rotten and others. There’s also the recently released free download of Slumdon Bridge, a four-song spontaneous partnership with Alabama rapper Yelawolf written and recorded in 10 hours.

His performance work ethic is equally daunting: a particularly aggressive concert run in 2009 found Sheeran playing 312 shows within the year. Why the punishing pace?

“The whole reason of doing 312 gigs was to become a very accomplished live performer at a young age,” explained the carrot-topped Sheeran over the phone from Los Angeles a few weeks ago, prior to a Jimmy Kimmel Live appearance.

“I was taught at an early age by my Dad that practice makes perfect, and if you want to be the best at anything, you have to put in the hours. So my idea was to play 312 gigs in front of crowds of two people or 500 people, or 4,000 people and play in different scenarios.

“So I was playing acoustic gigs and hip-hop gigs and soul gigs and poetry gigs that were totally random shows. Now I’m at the stage where you can put me in front of any audience and I can hold my own.”

Sheeran also isn’t afraid of taking matters into his own hands: in 2010, frustrated by the lack of career progress (and shortly before his single “The A Team” debuted at No. 3 on the U.K. charts), he fired his management, flew to L.A. and ran into an unexpected benefactor: Oscar-winning actor, musician and comedian Jamie Foxx.

“I went over to L.A. to do a few shows for a guy and asked him if he could hook me up with any other gigs,” Sheeran recalls. “One of them happened to be at the Foxxhole, which is Jamie’s venue, and (Foxx’s) manager booked me for his (Sirius XM) radio show. I played the radio show and Jamie said, “Come and hang at my house and record. I’ve got a studio for you to use.’”

Some of the songs from + were written at Foxx’s place, but more importantly, the encouragement boosted Sheeran’s confidence.

“It restored my faith in what I was doing, because until then I was in a rut, playing the same shows for the same people in the same venues in England,” Sheeran concedes.

Sheeran, who says he first started playing guitar “because I saw a video of Eric Clapton playing ‘Layla,’” returned to England and signed with Elton John‘s management firm, and later, the Warner Music Group for his label. But he has made sure that his record deal allows him to remain prolific.

“My contract basically says is that I can deliver albums where and when I want them (but) also pursue other projects,” Sheeran explains.

“It’s a good freedom to have, because I can justify it. I can say, my album’s been successful, so this is my year to remain relevant. I can go off and do what I want and that will work.”

And regularly adjusting his sound to stay relevant is of utmost importance to the man who wrote “Moments” for the new One Direction album, Up All Night.

“I always want to release songs that mean something to me, and always have an interesting live show and interesting sounds on the album. I just want to do something that people won’t expect.”

Sheeran, who always plays solo, and will return as a headliner in September, opens for Snow Patrol April 17 and 18.