Activities and better food than usual is meant to spice up the musical lineup at Burl’s Creek featuring the Strumbellas, De La Soul and more.

At The Big Feastival, held August 18-20 at Burl’s Creek, you’ll have your chance, as 50 acts including Weezer, Ben Harper & The Innocent Criminals, The Strumbellas, De La Soul and more team up with an armada of 23 Canadian chefs commandeered by Montréal culinary superstar Chuck Hughes combine talents to feed your ears, eyes and stomach. 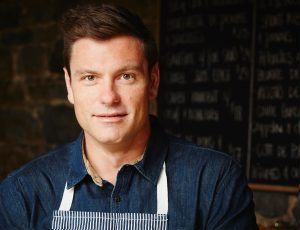 “I can’t wait!” exclaims Hughes, 40, the host of such cuisine-oriented TV show staples as Chuck’s Day Off and the upcoming Chuck’s World.

“This is a first: They’ve been doing it for about six years in the U.K. with Jamie Oliver — a little-known guy, I don’t know if you’ve heard of him,” he jokes, “And Alex James from Blur,” noting that the bass player has become a cheese maker of note.

“The festival is truly unique in the sense that it caters not only to adults, but kids as well. There’s camping and a lot of great activities, so it’s food, music, camping — but mostly it’s for all ages.

“That’s the one thing for me that stands out as opposed to a lot of the other festivals — is that you’re always trying to dump your kids somewhere . . . I think it’s going to be a great time.”

“On the festival circuit this year there’s not a lot of space to do our personal favourites, so we’re trying to get just an outline of all the hits and singles and try to represent every album a little bit,” he explains over the phone. “So we do our best — but we run out of time fast.”

Aside from such hits as “Hash Pipe” and “Buddy Holly,” there’s enough time to squeeze in a one-song preview for the band’s upcoming album in the form of “Feels Like Summer,” which made tongues wag when the song’s accompanying video features Weezer members dressed as Guns N’ Roses, with singer, songwriter and guitarist Rivers Cuomo wearing a red wig and bandana as a tribute to Axl Rose and guitarist Brian Bell sporting a Slash top hat. 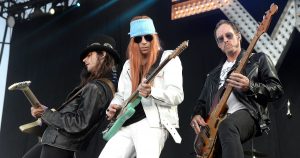 Shriner explains that the spontaneous video filming occurred during a performance near the Rose Bowl and they wanted to create a stadium feel by dressing as the hard-rock legends. He says they aren’t like to recreate that scenario at the Feastival.

“That was a one-time deal and nobody knew what was going on it just seemed like a lot of the audience, ‘What is going on here? They’re playing ‘Hash Pipe’ but that doesn’t look like Weezer.’ ”

At events like Montréal’s Osheaga Music Festival, feeding bands such as Weezer has been the exclusive duty of Hughes for nine years (“It’s funny — for rock stars that have a lot of money, (bands) eat like they’re homeless and they’ve never seen food before,” he quips). He’ll have a lot more responsibility on his plate for the Feastival.

“I’m basically the head chef of all the chefs that are there,” Hughes explains. “I will be doing cooking classes, demos, talks — I’ll be reading books to kids. I’ll be all over the place — there’s a whole bunch of different activities that I’ll be doing. But mostly I’ll be available on site, just around everywhere, taking care of everything food.”

Hughes will be supervising such Canadian chefs as Vikram Vij (Vij’s Restaurant, Vij’s Rangoli and My Shanti, Vancouver); The King Street Food Company’s Rob Gentile (Buca Osteria & Enoteca among others); Danny Smiles (Le Bremner,Montréal); Alexandra Feswick (The Drake Hotel); Devin Connell (Delica’s Kitchen) and others. The chef and co-owner of Montréal’s Garde Manger and Le Bremner says the emphasis of the Feastival will be placed on food quality.

“The beauty of the festival is that it’s really a focus on homemade, good quality food, as opposed to a lot of festivals, where the whole goal is ‘deep-fried butter,’ ” notes Hughes. “So we’re not going to have the sugary drinks and the mass-produced, not-so-healthy foods. There’s a way of having what I qualify as junk food — burgers and stuff like that — but making them a little bit healthier and choosing options that are a little bit more sustainable and more in line with what we kind of want to bring to this festival.”

Throw in wine-tasting and a cheese cave for the adults, cooking schools for both big and little ones, a petting zoo, rides, games, (entertainers Fred Penner and Splash ’N Boots will appear for the tykes), and a ton of other activities, and The Big Feastival will keep everyone who attends busy from the moment they set foot onto the site.

“There’s camping and sleeping there and a whole bunch of chef’s quarters — it’s going to be a good time,” says Hughes.

After the Big Feastival, Weezer spends the next month or so headlining other fests on weekends and will eventually get to work on its next album. For a band that is now 25 years old and has the propensity of self-titling its albums — four of its 10 collections are called Weezer and are differentiated by colour scheme — Shriner says his group’s 11th probably won’t be the “black album,” although it has been announced as such.

“We’ll have to hold off on that title,” he states. “At first we were thinking it would be called ‘the black album’ because we did kind of a summer album the last time with our ‘white album’ — so we’ll do something a little darker this time. Once they get a collection of songs together, they’ll get a better idea of what the concept’s going to be.”

Shriner says that it’s usually management and the producer — in this case, Butch Walker — that helps choose the dozen or so Rivers Cuomo songs that make up the project.

“He writes 100 songs and 12 of them are amazing, and that’s usually what we use to make a record,” Shriner says of Cuomo.

As for the band’s plans to celebrate their 25th birthday?

There are none, says Shriner.

“I haven’t heard about any special packages or releases,” Shriner says. “Maybe we could go out and make some belt buckles or something — that would be cool.”

Be the first to comment on "New to Canada, Big Feastival promises to serve superior food on top of Weezer and more"