The museum set up in Neil Young’s onetime home town pays abundant tribute to his early days, and the rock icon himself has noticed. 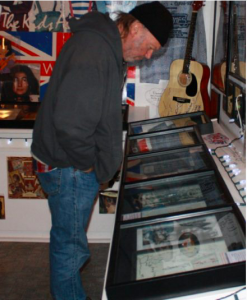 Not too long ago, one of Trevor Hosier‘s lifelong ambitions came true.

No, not the one where he creates and curates his own rock ‘n’ roll museum: That dream finally manifested itself four years ago, when he opened Youngtown, a turn-of-the-century, two-story, wooden-framed, aluminum-sided outpost filled with relics of a rock-and-pop infatuated youth, located on a strip of Highway 7 two-hours-and-change north of Toronto, in the blink-and-you’ll-miss-it hamlet called Omemee.

Hosier’s milestone moment was the visit of that town’s most celebrated son last October: museum namesake Neil Young dropped by with his brother Bob just to see what the music enthusiast had been up to.

“I’ve met Neil a number of times, and since we opened in the springtime of 2008, every time I saw him at Massey Hall or the Air Canada Centre, I’d say, ‘So when you getting out to the museum?’” Hosier recalls.

On October 7, 2010, true to his word, that day finally came: With Bob Young in tow, Neil entered the building and spent the next hour scanning the thousands of the rock ‘n’ roll relics Hosier has accumulated over three decades of autograph-hounding, auction-bidding and donations.

The 65-year-old Canadian icon, who will be honoured this Sunday at the Air Canada Centre with the Allan Waters Humanitarian Award during the Juno Awards, was duly impressed. That’s if we can judge by the personal memento left by Young, two-time Rock and Roll Hall Of Fame inductee, Canadian Music Hall of Famer, and winner of a Grammy just last month for Best Rock Song for “Angry World.”

Young left on the spot the handwritten, introductory verse to “Helpless,” a classic Young song that refers to his Omemee childhood with the words, “There is a town in North Ontario, with dream, comfort, memory to spare.”

“When he was leaving, Neil paused at the door, turned to me and said, ‘Yeah, I’ll look through my stuff, see what I’ve got and send it off to you,’” recalls Hosier.

“He was sincere about it, and seemed to genuinely enjoy his visit.”

Although the promised box of memorabilia has yet to show up on Hosier’s doorstep, the 49-year-old family counsellor recently received another prized Young donation.

One recent Sunday, while leading a visitor through a memorabilia-packed maze of exhibits that encompass authentic artifacts from Roy Orbison to The Beatles, Lynyrd Skynyrd to The Grateful Dead, Hosier points to the latest gift: an upright Mason & Risch piano that once belonged to the Young family.

“This was donated by the Young family about three weeks ago,” explains a grinning Hosier, his eyes beaming with pride. “They just sold their farm south of town. Neil and his sister (Astrid) bought this for their Dad back in ’93, when they opened the public school for him and named it the Scott Young Public School.

“Everybody in the family has played this gem.”

Why is Youngtown Rock and Roll Museum (open exclusively on weekends in late April through October) located in the Kawartha Lakes community of Omemee, population 1,100?

It’s the place that served as the anchor of Neil Young’s idyllic childhood, and Hosier said he wanted to pay personal tribute to the Young family, who lived approximately six buildings away from the museum.

Although Neil was born in Toronto in 1945, his father Scott moved the clan — which included his mother Edna (Rassy) and brother Bob to Omemee when Young was four, spending the next seven years in the village. Then, after the publication of Scott’s first novel, The Flood, in 1956, the family relocated to Brock Rd. in Pickering.

Neighbours and acquaintances — most of them now in their 60s and 70s — recall the Youngs, who lived in a three-story house at 33 King St. W., about a five-minute walk from the Pigeon River, where Neil used to fish.

“My late husband, Willard, had a convenience store in town where he sold fishing tackle, comic books, ice cream and hunting rifles, too,” recalls Joan Rehill, owner of the nearby Butternut Folk Art store.

“Neil would go in there with a string on the end of a stick, and get my husband to put a fishhook on it so he could go down to the river and fish.

“My husband used to call him Zeke. He thought that was a good nickname for him, because he said he never thought that Neil would turn out to be the guy he is today.”

Although Scott Young‘s friends declined to be interviewed, Hosier says many still talk about the future minstrel with affection, including one of Scott’s best friends, Jay Hayes.

“Jay was saying yesterday, ‘You’d see Neil walking around town with ripped britches — he looked like a little urchin boy.’

“He said, ‘I remember when someone came to town, but he felt so sorry for this little kid that he took him in one of the shops and bought him an ice cream.’”

Enter the museum, and you get a sense of what Neil Young’s simple life in Omemee was like: there are pics of him as a boy, along with a coterie of his neighbours and boyhood chums: folks with names like “Goof” and “Stretch.”

It was here also where Neil first discovered his love of trains (which manifests itself regularly in his lyrics to this day) and where his health was severely tested when he contracted polio. That ordeal hasn’t seemed to diminish his affection for the town. 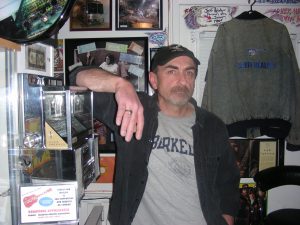 Youngtown Museum owner Trevor Hosier and his labour of love

His father certainly couldn’t keep away, despite the move to Pickering — where Neil’s love for music was kindled as he discovered CHUM Radio — and then to Toronto.

In 1967, just minutes from Omemee in nearby Cavan Township, Scott bought a 100-acre farm and built a house on the land. He sold it in the late 1980s to relocate to Dublin, Ireland, but repurchased the farm in 1992 and lived there until his death in 2005.

According to Hosier, Scott Young’s widow Margaret Hogan sold the farm in 2010, but a Young presence remains: Neil’s brother Bob recently moved back to the area.

Neil Young continues to quietly visit the area, and Hosier has a theory as to why Omemee is still near and dear to the recent Grammy Award winner’s heart, since it represents a happier time before Scotty and Rassy’s marriage disintegrated a few years later.

“Neil and Bob and all of them are fond of this place, not only because their dad was here for so long, but the whole family was still together when they originally moved here.

“It was sort of their day in the sun, so they look at this place as home.”

The Neil Young exhibit contains artifacts other than childhood mementos. There are walls of photos, posters, autographed electric guitars, gold and platinum albums, a life-size stand-up of Young and many other items covering a prolific career that has lasted nearly half a century, including a red-triangle promotional vinyl pressing of 1981’s Re-ac-tor; a limited-edition Lionel Train set to commemorate the release of 2003’s Greendale and the acoustic guitar used to compose a number of songs — including “Natural Beauty” — from Young’s 1992 multi-platinum album Harvest Moon.

“That (guitar) sat on his bus for months,” says Hosier, who says he first drew up plans for the museum 20 years ago.

“I had an idea that I wanted to do something in this town, because there wasn’t anything to pay tribute to Neil or the family at that time,” he explains.

“It wasn’t to be until about 2006 I started thinking about it again. My collection was definitely outgrowing our house and my office.

“Unfortunately my parents passed away in 2006 and left me a little bit (of an inheritance), and my wife, Brenda, and I thought, ‘What can we do to have some fun?’

“So we bought this old building and restored it — it was in pretty rough shape — and came up with the name Youngtown.”

“In my mind, there’s no greater artist in Canada than Neil Young,” says Hosier. “We have a lot of great artists and we have some wonderful bands — the Guess Who is one of my all-time favourite bands — but as a solo artist performer-musician-songwriter extraordinaire, Neil’s the guy.

“One of the reasons he and his music have stood the test of time is because of the quality of his writing and because there’s a depth to it. Neil is true to himself, he’s true to his ideals. He’s a rock ‘n’ roll rebel who isn’t afraid to speak his mind, and isn’t afraid to stand up for things.

“He really does care about people, whether it’s Omemee here and how he treats people, or doing things with his Bridge School or Farm Aid, and multiple other smaller ventures, he ultimately cares about people, and that comes across in his music, too.”

Hosier, who runs Youngtown as a non-profit labour of love, is hopeful that Young will return some day and spend more time at the Museum.

He said Young indicated he might return sooner than later.

“I asked him to play a song on the guitar that we have upstairs for us — I said, ‘How about doing a song for us there, Neil?’” Hosier recalls.

Neil Young is receiving the Allan Waters Humanitarian Award at the 40th Juno Awards ceremony at the Air Canada Centre, where is he also nominated for Artist of the Year and Adult Alternative Album of the Year for Le Noise.

Be the first to comment on "Neil Young: take a look at his life"