The progenitors of “Party Rock” have returned.

Direct descendants of Motown founder Berry Gordy, the duo continues to wiggle and shuffle on the coattails of its gazillion-selling Party Rock and Sorry For Party Rocking albums. We asked Redfoo just what it takes to plan and produce the perfect party. 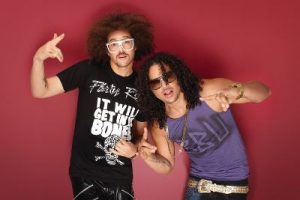 Q: What’s the best party you ever attended?

A: It’s probably Party Rock Mondays in Vegas, held once a month at Marquee at the Cosmopolitan. It’s actually a party that I throw, and it’s crazy: There’s crowd-surfing, Champagne showers, confetti and dancers all dressed up in Party Rock Afro wigs. It’s the best of every party I’ve ever been to, thrown into one party. It includes locals, but also tourists. You know, people who are traveling and on vacation are that much crazier. You can go to Youtube.com/Redfoo, my YouTube channel, and you’ll see what I’m saying. It’s incredible fun!
That’s what we set to do with all of our shows — we just want to make it the best party. I guess now the best parties are the ones we’re performing at, because we can control and guide it.

Q: But it was a party at the Miami Winter Music Conference a few years ago that served as a catalyst for this lifestyle.

A: It was, ‘Wow, look at this new world we’ve just entered.’ It changed our perspective. Every day we had a drink in our hand. We’d go to different pool parties, and because it was a conference, it was evident that you can make a living by being great in this dance music party world. We walked out and thought, ‘this is what we want to do with our lives. We want to travel every day — live out of hotels, throw parties, make party music — and be the best at it.’ Now we’re doing that.

Q: What’s needed for you to transform the MMVAs into party central?

A: We’re really good at improv, having fun, interacting with people and making it crazy. So as long as we set all that stuff up, it’s like a playground. Our brand is so unique and identifiable, that if we don’t hump the zebra on the stage, then people will go home disappointed.

Q: LMFAO venerates nightlife and living large. What’s an overrated part of going out — the part you always try to avoid?

Q: How important is it to have, as you do, a dancing robot?

A: It’s almost as important as having alcohol or a live DJ, because you need to walk into a party and feel like it’s a little bit of anarchy. And a dancing robot will always do that.
Q: Any thoughts for your next album title?

A: It might be, Actually, Not Sorry for Party Rocking.