Songs have the ‘relentless riff’ but trio were a quick hit.

So it wasn’t entirely inspired by Daft Punk after all.

There are certain sources that would have you believe that the formation of Sydney dance music trio Art Vs. Science was strictly due to a rousing 2007 performance by the visiting French electronic duo that caused front man Dan McNamee to suddenly see the light, but keyboardist Jim Finn said that wasn’t exactly the case. 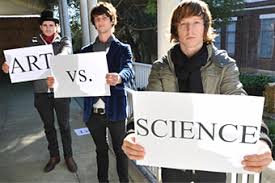 “Maybe that’s what Wikipedia says, but we’d been toying around with the idea of doing dance music for a little while,” says Finn, 29, whose band appears for a pair of NXNE performances: Friday night at The Garrison (10 p.m.) and Saturday’s free show at the Yonge-Dundas Square (4 p.m.) opening for Flaming Lips among others.

“But after seeing Daft Punk, it did really seal the deal. Everyone was going nuts about Daft Punk, seeing how dance music can affect people in that way — sometimes without any lyrics at all — and a really clever build: sometimes phrases are repeated quicker and quicker, and how it progresses to a climax where you have this huge explosion of energy from the crowd, just from the music.”

It’s a philosophy that Finn (no relation to the famous New Zealander Finns of Split Enz and Crowded House fame), McNamee and drummer Dan Williams embrace with their brash, fun and infectiously tribal beat-heavy anthems, which range from the blithe “Flippers” and “Sledgehammer” to the weightier, more melodic “Friend in the Field” and “With Thoughts.”

Their synth-saturated music is well represented with the recently released self-titled overview that melds triumphs dating back to their 2008 formation through 2011’s first full-length album The Experiment.

The members of Art Vs. Science are lifelong high-school chums that played together in numerous rock bands. But when the opportunity came for them to make the transition, Finn says it was baptism by fire. 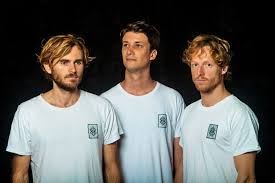 “Things started quite quickly for us,” he explains. “When we decided we wanted to start messing around with dance music, our band got offered a show and we reassured the promoter we had enough material for a 45-minute set.
“But we had no songs. We spent two days writing, and from that, one of our songs started getting played on the radio and we won a competition to play a big festival. And that festival was our fifth gig as a band — we played to two-and-a-half thousand people or so.
“It all progressed from there, so we didn’t play too many small venues. We didn’t have that struggling start that other rock bands have had to suffer through.”

Art Vs. Science — whose six-keyboard set up allows them to ply their Finn-described “relentless riff songs” live — loves to play festivals, booking a summerfest circuit that includes Bonnaroo and New York’s Governor’s Ball.

“To get dressed up in crazy festival gear, and go have a great day, get paid for it, and have a backstage pass, is mind-blowing.”

Be the first to comment on "Art Vs. Science: Dance band’s rise in fast tempo"