Toronto guitarist and pop megastar’s right-hand man has had best seat to watch his rise.

Just ask Dan Kanter, the Toronto guitarist, producer and musical tour director who has been the Stratford pop phenom’s right-hand man since The Bieb’s meteoric rise to the top began three years ago. 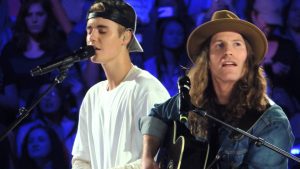 “It’s been quite the hectic run the past couple of weeks,” says Kanter, 31, who has crisscrossed the globe with his 18-year-old charge to promote Bieber’s new album Believe, out Tuesday.

Calling from New York after crisscrossing the world and a few days before a scheduled MuchMusic Video Awards performance, Kanter is still basking in the afterglow of a free Mexico City Bieber concert that reportedly drew 300,000 people.

“That was just unbelievable,” Kanter exclaims. “I’ve never been to a concert or played for that many people. There were people farther than I could see, past the horizon line.”

Still, Kanter says the biggest challenge isn’t playing before the ever-increasing number of followers that are being sucked into the Bieber vortex, but keeping up with his boss.

Kanter’s mettle was tested during a popular Spanish TV show two weeks ago.

“He was on the couch for the interview, and there was no break in between the performance, so he walked over to the stool where I was waiting for him — and I still had no idea what song we were going to do — and he said, ‘Let’s play ‘Boyfriend’ — which is his new single — ‘but change the chords and make it bluesy.’
“This was on live TV, and we did it. He’s unbelievable like that — he’s always keeps me on my toes.”

The fact that the Ottawa-born Kanter has the privilege of dipping his toes into Bieberworld is not one he takes for granted. Prior to joining the Bieber camp, he was a well-regarded sideman and tour director with female pop acts Fefe Dobson, Shiloh, and Suzie McNeil. 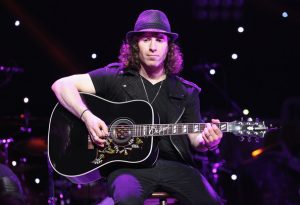 He recalls the fateful meeting with his current employer that occurred the day prior to Bieber’s debut MuchMusic performance.

“It was the summer of 2009. Justin was appearing on MuchMusic and they were looking to bring in a second guitar player to thicken up the sound, but also someone who could join the team as a musical mentor who would eventually become musical director.
“We hit it off right away. I think one of the reasons we had such great chemistry was because at that time he’d been living in Atlanta for so long, and I was the first person in a while he could chat with about hockey and Tim Hortons and The Tragically Hip. So we really had that connection.”

Since joining Team Bieber, Kanter has travelled all over the world, sharing stages with Stevie Wonder and Santana, Drake and Mary J. Blige; co-produced Bieber’s My World Acoustic; featured in the concert biopic Never Say Never; co-written and co-produced the ballad “Be Alright” on the new Believe and watched his charge evolve from tentative adolescent to mature pop superstar.

It’s been a run of indelible moments for both; from Bieber performing with Kanter at the latter’s wedding to the guitarist playing a Jimi Hendrix-like version of the Israeli national anthem before a Bieber concert last year in Tel Aviv. Currently preparing for a world tour that comes to Toronto in December, Kanter says audiences will see a fully blossomed Bieber.

“We’ll go into rehearsal in late July, and the tour starts at the end of September,” says Kanter, who hopes to follow in the songwriting and production footsteps of his heroes David Foster and Glen Ballard.

“I’m looking forward to this run especially. On the last one, when I started with Justin, a lot of the musical directing that I was doing was coaching him: working with him on his blocking and his singing, and even on just holding a microphone properly.