Star of the U.K. scene back in Toronto for shows at Camera. Can she make it three in a row?

Considering that U.K. folk darling Laura Marling‘s excellent first pair of albums — 2008’s Alas I Cannot Swim and 2010’s I Speak Because I Can — earned prestigious Mercury Music Prize nominations (and helped bag her a Brit Award earlier this year for Best Female Solo Artist), there’s no reason to think that her latest effort, September’s A Creature I Don’t Know, won’t follow suit.

But Marling, 21, who returns for two intimate sold-out solo shows at The Camera on Dec. 7 following her September Great Hall appearance, isn’t hedging her bets. 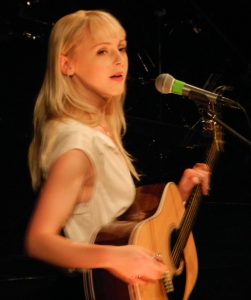 “It’s brought some popularity to my music that I wouldn’t have had otherwise,” she says of the attention the award nominations have brought. “But hopefully not in an overwhelming way. I worry because I wouldn’t want people to feel that they have to listen to my music.”

There are several reasons one should listen, though: songs like “Night After Night” and “The Muse” from A Creature I Don’t Know that are richly woven tapestries of literate splendour, bound tightly by her warm and vibrant alto; elaborately executed acoustic guitar passages; and an imaginative lyricism ambiguous enough to invite interpretation.

The daughter of a music teacher and a recording studio owner, Marling struck out on her own at the age of 16 and joined Noah And The Whale in time to contribute supporting vocals to the collective’s debut album Peaceful, the World Lays Me Down.

“When I joined Noah And The Whale, I was already doing my own thing,” Marling explains. “Charlie (Fink, Noah bandleader) produced my album, and literally, the next week, we did their album. It eventually came to a very obvious point where we couldn’t continue, and I’m still very sad that I’m not playing in that band, because I loved it.

“Some of the best musical memories I have are singing and performing songs that I loved without feeling any pressure to write them.”

At the same time, Marling was making inroads, the U.K. folk revival exploded, raising the local nu-folk profiles of songwriters Jamie T. and Johnny Flynn, as well as the global popularity of Mumford & Sons. Marling has a theory about the rejuvenation.

“I don’t know, but my guess would be that there’s a generation of people about my age who grew up on their parents’ record collection. I think it’s cyclical in that way.”

Some of that record collection was Canadian content — particularly Joni Mitchell and Neil Young — but Marling adds that some of the new album’s inspiration, especially the song “Sophia,” comes from late Canadian novelist Robertson Davies.

“The first trilogy book I read was The Cornish Trilogy,” she admits. “I just found his writing very close to my humour and I was fascinated by his fascination with women.

“He was completely in awe and mystified and he thinks women have the most incredible potential . . . They’re always quite central characters in his books — the females have either great power or great mysticism.” 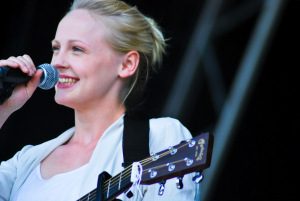 As she is an avid reader, Marling says that’s where she gets some lyrics: “I spend a lot of time mildly plagiarizing by writing things down from bits that I think are useful sentences,” she jokes.

Whatever her songs’ origins, Marling, who once played a string of cathedrals in her native U.K., promises to introduce a few new numbers that she’s preparing for some March recording sessions. But she says this tour is a combination of “half work and half play.”

“A friend and I are renting a car to drive around and I’ll be spending a few nights in Toronto seeing friends.

“Plus you have good coffee in Toronto.”

Be the first to comment on "Laura Marling winning folk over"