The big business of metal

Nick Krewen
Special to the Star,
Published on Fri Dec 02 2011

The timing couldn’t really have been any better for the latest Five Finger Death Punch album, American Capitalist.

With the “Occupy Wall Street” protests against social and economic inequality still lingering in our craniums, the five-piece Los Angeles-bred groove metal band garnered a little extra attention surrounding the release of its third effort in late September, about a dozen days after the first demonstration, when media interest in the movement was just starting to percolate.

“It’s a whacky coincidence,” says Hook, 41, who will be lead the dual fret attack with fellow axe man Zoltan Bathory when Five Finger Death Punch lands at the Sound Academy Tuesday for its “Share The Welt” show (headlining a mini-metal fest that includes All That Remains, Hatebreed and Rev Theory).

“We had the concept for American Capitalist almost a year before any of this Occupy Wall Street was going on.” 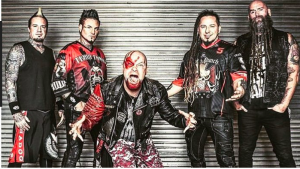 Even if it had been planned, Occupy protesters expecting a supportive stance from a band hailing from a genre often known for criticizing “The Man” and the materialism he stands for would be sorely disappointed.

Despite forging a sound that relies on the subterranean sing-and-scream brutality of Ivan Moody and the lightning execution of a melodic mélange of thrash, metalcore and hints of Tool, Hook says the theme of American Capitalist is one of endorsement.

“Large corporations for me are a good thing,” says Hook from a Niagara Falls, N.Y. tour stop.

“Five Finger Death Punch is a corporation, and it is big business and we do make people happy, and it gives us all comfort and freedom and security to continue doing what we are all passionate about. For me, the corporate side is fine, I’m all for it.”

For Hook, who had stints in the Vince Neil and Alice Cooper guitar chairs since he left Oakville for L.A. back in the ’90s, membership in Five Finger Death Punch is a reward for a lifetime of hard slogging.

“I can’t relate to the guy sitting on the concrete with the cardboard sign saying ‘I’m getting screwed,’” he explains. “I can’t relate to that at all, because I’ve fought and worked hard and taught myself skills and figured out how to get what I wanted.”

Hook has certainly hitched his wagon to a fast rising star. Five Finger’s first CD, 2007’s The Way of the Fist, scored a radio hit with “The Bleeding,” an opening slot on Korn’s Family Values Tour and sold over 500,000 copies.

Hook joined in time to co-write all of 2009’s also gold War is the Answer, produced by fellow Canadian Kevin Churko — known for his Grammy-nominated work with Ozzy Osbourne — and enjoy more radio success through the original “Hard To See” and the band’s breakthrough cover of Bad Company’s “Bad Company.”

Now that American Capitalist, also produced by Churko, has entered the Billboard 200 album sales chart at No .3, Hook says the band is working its relentless schedule of “touring until we’re done touring, and then we’ll start touring.”

They’ve pencilled in a cross-Canada tour for March. With an American Capitalist song called “Back For More” gracing the bestselling Madden NFL 2012 video game soundtrack, Hook and his Five Finger pals seem content to cash in on their good fortune with their extreme work ethic.

Hook says it’s the underlying message of the new album.

“Be a driver in your life instead of a passenger.”

Be the first to comment on "The big business of metal"