Musician’s creation, the guit-steel, lets him stand out amid sea of talent at Toronto fest.

When the second annual Sleepwalk Guitar Festival convenes at the Great Hall from Nov. 2 to 4, there will be plenty of six-string pioneers but only one inventor in the mix. 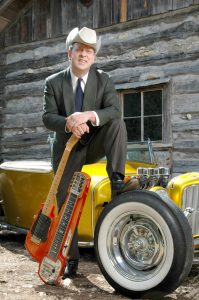 The Indiana-born Brown, who has amassed a cult following over the past two decades for his unique approach and humorous Ernest Tubb-inspired songs like “Highway Patrol” and “My Wife Thinks You’re Dead” that feature his scrape-the-barrel baritone, originally came up with the Guit-Steel idea in 1980.

“I just like to play guitar and steel guitar and I like to have both of them on a song that I’m singing,” Brown, 60, explains about the double-necked instrument that melds a six-string electric with a lap steel guitar.

Speaking from his home in Tulsa, Brown remembers approaching noted luthier Michael Stevens and receiving his first guit-steel prototype — which he christened “Old Yeller” — in 1985, the night before hopping on a plane to a prestigious Nashville show with the cream of the crop in terms of sidemen.

“I had to sit down and play it on my lap, because I hadn’t invented a stand for it yet,” Brown recalls. “The gig was at the Station Inn, a popular bluegrass club in Nashville, and I played with Peter Rowan. Vince Gill sang that night with us, Mark O’Connor played fiddle, Jerry Douglas was on Dobro and Roy Husky Jr. was on bass.
“It was a very high-profile gig and I walked onstage and started playing the thing like I’d been doing it for 50 years,” he chuckles.

After becoming a fixture in the Austin scene and enjoying a residency at the Continental Club, the self-taught Brown’s neo-traditional country retro sound attracted the ears of Mike Curb, the former California governor and label honcho responsible for bringing Tim McGraw and LeAnn Rimes to the masses.

“Mike Curb is a very forward-thinking guy, and I was so thrilled that a guy like that would make my lifetime dream come true,” says Brown. “What I do isn’t the radio-friendly Nashville music of the early ’90s, which is when he signed me. But there was sort of a retro-feeling going on at that time. Ricky Skaggs and Randy Travis had done music that reached back into tradition, so the doors had been opened for something like that.”

Brown’s increased profile led to some unlikely outside opportunities, like appearing on an episode of The X-Files and commercials for Lipton Tea and The Gap. But hit records weren’t to be, his deal with Curb ran its course and after a couple of more releases on Telarc, Brown has recently issued a brand new six-song EP, Volume Ten, on his own JRB Records. 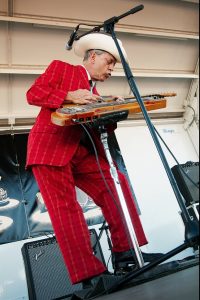 Sleepwalk curator Luke Doucet says what he likes most about Brown is that “he shoots from the hip . . . He draws from influences that are very Texas. Junior pays tribute to a lot of the different things that one would expect when they think about Texas guitar playing — not simply the country or the Western swing, which is sort of what’s implied in a lot of the songs that he writes — but I hear Albert King, Jimmie and Stevie Ray Vaughan and the Texas Playboys in his playing. And in his comping, you can hear Charlie Christian and Wes Montgomery.”

As for the guit-steel, even though it’s been made available to the public, Brown swears he’s the most visible player of the instrument out there.

“A few people have bought ’em, but I’ve never seen anybody play it except in a picture.
“It’s a bit strange to see someone playing one, because it’s like someone dancing with your wife,” he laughs. “Hey — wait a minute — put that down — that’s my baby!”