Aerosmith aims to turn back the clock with new album
Steven Tyler and Joe Perry compare their new collection to ’70s classics like Toys in the Attic.

You know that adage “what doesn’t kill you makes you stronger?”

The maxim can be fully applied to Music From Another Dimension, Aerosmith’s first new studio album of original material since 2001’s Just Push Play.

The road to the legendary Boston rockers 15th album (30th, if you include various live discs and compilations) released on Nov. 6 has been fraught with landmines, many which threatened to detonate the impressive 40-year-long partnership of singer Steven Tyler, 64; guitarists Joe Perry, 62, and Brad Whitford, 60; bass player Tom Hamilton, 60, and drummer Joey Kramer, 62.

Eventually produced by Jack Douglas, the man responsible for the band’s classic ’70s trifecta Get Your Wings, Toys in the Attic and Rocks, the Music From Another Dimension sessions began back in November 2007 with another producer, Brendan O’Brien. 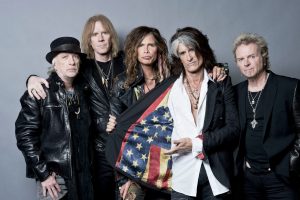 But the album’s progress got hung up: Aside from the usual business-related interruption of touring and helping to develop the video game Guitar Hero: Aerosmith, there was acrimony between the two key players that threatened their fragile ego-fueled equilibrium: in 2009, Perry announced that Aerosmith was openly auditioning a singer to replace Tyler, and later, the singer’s two-season 2011 commitment to judging American Idol seemingly irritated Perry to no end.

Then there were four years of random health issues to contend with, to be expected from a band now a combined 308 years old: a Perry knee injury; Whitford head surgery cause by a bump on the noggin; a Tyler leg injury; Hamilton surgery related to his throat cancer recovery; a Tyler fall during a show in South Dakota that resulted in a broken shoulder and head and neck injuries; a Tyler rehab spell to break a painkiller addiction and another Tyler fall in Paraguay — this one due to food poisoning — that damaged his face.
“Life, doctors, divorces and dirtbags — you know, a whole bunch of things can get in the way of a bunch of guys getting in the studio,” admits Tyler, patched in from California with Perry for a 10-minute phone interview in late September to promote both the new album and Aerosmith’s Nov. 27 return to the ACC, six months after a sellout date here in late June.

“Yeah, but that’s all the stuff that makes the album what it is,” Perry chimes in. “Those life experiences all play into the energy that happens when the band gets into the room.”

The fact that the duo is conducting interviews together indicates that not only are things hunky-dory between them at the moment, but that there’s also a lot at stake: the 15-song Music From Another Dimension — their first album of new material in 11 years — is the last album of a $30-million record deal that Aerosmith signed with Sony in the early ’90s. 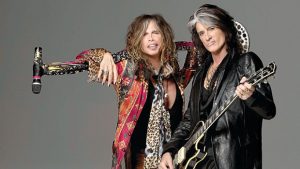 And the album sounds like rock stars heading for free agency, with a little something for everyone who has helped built the band into a 150-million-album-selling powerhouse over 42 years.

Adore the lovesick saccharine drip of Aerosmith’s biggest monster hit; the Diane Warren-penned “I Don’t Want To Miss A Thing?” Surprise — there’s another Warren ballad called “We All Fall Down.”

Although they previously filmed a duet with Christina Milian for the odorous motion picture Be Cool, the power ballad “Can’t Stop Loving You” with country singer Carrie Underwood is the first committed to album. A decidedly non-rock instrument — the flute — makes its Aerosmith debut on the album-concluding slow dance “Another Last Goodbye,” and there are celebrity cameos by Julian Lennon and Johnny Depp.

But the most important aspect of Music From Another Dimension, say Tyler and Perry, is the united creative front.
“It’s more of us I think than it’s been since the ‘90s when we did a lot of collaborations,” Tyler emphasizes. “We sat in the studio and wrote together again, and it was like going back to the campsite and realizing that we could build a fire just as big as before.
“We ended up dancing around the fire and took a bunch of stuff — our old licks that never saw the light of day — and stole from ourselves.”

Perry says recording Music From Another Dimension made him feel nostalgic.

“We had the same feelings we had cutting this as we had when we were in the studio doing the second record or the third record — those records with Jack,” he admits. “All you’re thinking about is that the energy of this thing feels really good and here comes Joey’s drum roll, and wow, it needs another guitar lick right here because Steven’s vocal is coming right in, and it’s exactly the same feeling when we were putting together the song ‘Toys in the Attic.’
“So I think that’s why we’re as excited as we are. I can’t remember the last time I felt this good about an Aerosmith record.”

Toronto audiences got a preview of the album back in June via performances of “Oh Yeah” and “Legendary Child,” and it’s certain that crowds who shell out for this leg of the Global Warming tour will probably hear even more of the new album by a band who rarely repeats their set list.

“As for me, I’m on fire right now. I can’t wait for the world to hear what we got. It’s almost between Rocks and Toys in the Attic — that album that fell through the cracks. So I’m really happy about it.”