Metric was so concerned with the business of execution that for a while they ignored one of the key aspects of showmanship: acknowledging the crowd.

There is little doubt that Emily Haines is a star.

All she had to do, within moments of taking the Air Canada Centre stage with her Metric band mates on Saturday night, was lift one heavily-fringed arm in the air, sing the opening phrase from “Artificial Nocturne,” and her charisma — that intangible form of personal magnetism that irresistibly draws your eyes and ears to the subject, while simultaneously gifting them with a larger-than-life presence — kicked in. 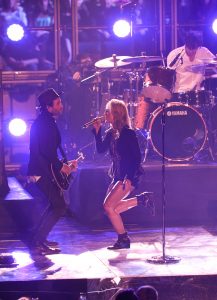 From then on, Haines became the visual focus for the estimated 9,000 in attendance as we collectively watched her jogging on the spot, sashaying to and fro, dividing her time between working the crowd and tending to her keyboard, and helping the rest of Metric — guitarist Jimmy Shaw, bass player Josh Winstead and drummer Joules Scott-Key — trot out a good slice of its outstanding new album Synthetica; a generous mitten full of tunes from its breakthrough 2009 Fantasies, and reaching as far back into its history as Old World Underground, Where Are You Now? from 2003.

It should have been enough, but for a good portion of the show — especially a hometown one—it simply wasn’t.

Even more puzzling, the missing spark during the first hour or so wasn’t due to any lacklustre effort from the synth-driven Toronto band: the spring-coiled exuberance of “Youth Without Youth” melted seamlessly into the hammering “Speed The Collapse,” with Haines’ agreeable alto ringing clearly throughout the arena.

And it was that way for the entire show: when one song ended, another began, the spare, spacious stage offering lots of runaround leg room as domino-shaped lighting modules and throbbing beats transformed the ACC into Euro-flavour dance club, albeit one that wasn’t simply a wall of sound, but contained a fair degree of nimble dynamics.

Drummer Scott-Key, hidden behind his kit, admirably served as the metronomic backbone of the band’s smartly written repertoire; bassist Winstead muscular presence added drama to the bottom end, and guitarist Shaw, the man in black, swapped between sonic fill and the occasional wail to complement Haines’ keyboard wash.

But that may have been the problem: Metric was so concerned with the business of execution that they ignored one of the key aspects of showmanship: acknowledging the crowd.

Especially since they were in Toronto. This concert did not have the special hometown feel or even that it was the end of their first successful cross-Canada arena tour: Haines didn’t even really talk to them until the encore, as a minor a quibble as that might be, it could have been the difference between what was and what could have been.

However, chalk it up to the band’s tenacity that they managed to turn things around, although they were on the brink of disaster with a seriously lagging “Help I’m Alive” before they righted the ship.

In the end, it was a simple formula that rescued the momentum: the big finale. Get louder. Use tons of rapidly changing lights at the conclusion of each song. Play your more popular material. 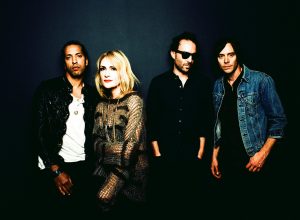 Metric’s performance cachet increased exponentially as “Dead Disco,” allowed to breathe and percolate for several minutes as the crowd soaked up the beat, jumped into a loud and brash “Stadium Love,” but it was a punk-edged “Monster Hospital” and a screaming Shaw solo that finally loosened the crowd up to the point where they danced with unhinged abandon.

After the smoke had cleared, Metric co-founders Shaw and Haines took the stage, he strumming an acoustic guitar, she lamenting about the fact that “Monster Hospital” — a song about war-related post-traumatic stress disorder — failed to open up a needed public discussion regarding the topic. Haines then segued into reminiscing about attending Etobicoke School of the Arts with Amy Millan of Stars, Metric’s opening band for the evening, and continuing friendships, before finishing the show with a gentle acoustic rendition of “Gimme Sympathy.”

It’s a rare occasion when the rock star constellations align, as it has with Metric and Stars, the Montreal-based collective headed by Torontonians Torquil Campbell and Millan, in terms of courting success on their own terms almost simultaneously.

Speaking of Stars, they offered an enjoyable enough 45-minute set of songs that emphasized their indie dance rock through a blue haze of glitter balls — no less than six of them — which obscured their stage presence.

The tambourine-wielding Campbell and guitar-wielding Millan led the six-piece band through some fine moments with “Hold On When You Get Love And Let Go When You Give It” and “A Song Is A Weapon,” but one got the feeling it was just the tip of the iceberg, a warm-up taste of what Stars is truly capable of.

But it’s all evolution, right? Metric needs to tinker its approach slightly, and Stars needs a stage of their own.

Neither band is quite at its apex, but when they arrive, watch out world.

Be the first to comment on "Metric at ACC: concert review"