Folkie J Tillman is having a lot more fun onstage these days with his new musical alter ego.

J. Tillman, alias Father John Misty, has momentum in his relentless touring, including a new stop in Toronto at Lee’s Palace on Oct. 27.

In fact, the 31-chapter novel that sparked the transition, Mostly Hypothetical Mountains, printed in broadsheets and included in copies of Tillman’s debut Father John Misty project Fear Fun, is what precipitated the dozen-song indie rock outburst in the first place. 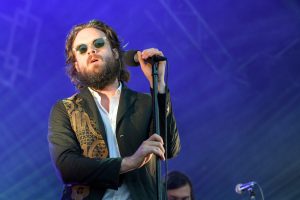 “The novel was written prior to the actual writing of the songs, yeah,” says Joshua Tillman, whose five-piece Father John Misty experience at Lee’s Palace Saturday marks his third Toronto appearance in six months.
“But the reasons for doing it didn’t resemble the reasons that I had to make music or something. It was like a fool’s errand, and while I was writing that, some of that liberation that you hear in the album really started to surface.
“I felt like in the process of writing that book, I gained access to a narrative voice that really more closely resembles that way that I talk and that I think exponentially more than my solo albums ever have. And, once I accessed that, I felt obligated to use it.”

Frankly, after releasing seven acclaimed albums as J. Tillman between 2005 and 2010, the songwriter grew tired of his solemn acoustic-folk oeuvre.

“I’ll go as far as to say that there were some misperceptions that I was living under for a long time, and those misconceptions created dissonance,” he admits. “I think they made me creatively unhappy, and I was sitting naked in a tree one day, and realized there was this thing that I could do.”

So he jumped in his van for a psychedelic mushroom-fueled, soul-searching road trip, and discovered his muse.

“I didn’t write songs for a little while after doing that, but then once I actually picked it back up, very different, strange-sounding songs were emerging,” Tillman, 31, confirms.

Possessing one of the most appealing tenor voices around, Tillman expands his folk-rock parameters on Fear Fun by nudging into pop territory with “I’m Writing A Novel;” plays it for laughs with the easy country lope of “Funtimes In Babylon”; and explains his reasons for decampment from Seattle to L.A. in the dreamy soundscape of “Nancy From Now On” and his name change on the ebullient “Everyman Needs A Companion.” 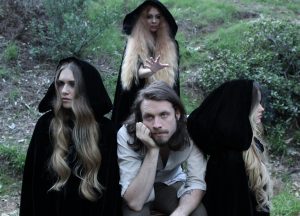 “The thing I keep hearing from people who have known me for awhile and have all the albums, is that this actually sounds like me,” he states. “There was always kind of this big disparity between the J. Tillman on album and Josh Tillman the dude, and that disparity did become really unsatisfying to answer for.”

Although he’s admittedly exhausted — the Misty tour has kept an insane schedule that finds him performing another 32 dates after Toronto and swinging through Europe before Christmas — Tillman welcomes the change, especially being able to ham it up as front man in a way he says is closer to his natural personality.

“If you saw the Fleet Foxes, my demeanour on stage — some of that bullshitting and telling jokes and not taking it all very seriously — it’s kind of like that to the 100th power on my show,” Tillman explains.
“I find this style of performing really exhilarating — mostly because I don’t have to get into any alternate headspace or something in order to perform.
“I really haven’t been sleeping much the last three or four days, and there’s some kind of sleep deprivation-induced shamanic state or something — I feel like a drunk wizard onstage — but it’s something about being exhausted that’s good for performance.”

And good enough for Tillman that he’ll continue on in the Father John Misty mode for the foreseeable future.

“I’ll definitely make another album and on and on into oblivion.”