John Mayer stepped on the Sound Academy stage last night secure in the knowledge that Battle Studies , his first full-fledged studio album since 2006’s Continuum , will be the No.1 when the Billboard charts are updated on Thursday on the strength of over 300,000 copies sold in the U.S.

John Mayer stepped on the Sound Academy stage last night secure in the knowledge that Battle Studies, his first full-fledged studio album since 2006’s Continuum, will be the No.1 when the Billboard charts are updated on Thursday on the strength of over 300,000 copies sold in the U.S.

Joined by 3,200 fans for an intimate performance that was taped for a future online concert by Sympatico.ca, Mayer wasted no time in getting his celebratory groove on.

Anchored by the booming, spacious beats pounded out by drummer/album producer Steve Jordan, and fortified by a seven-piece band that included Pretender and occasional Paul McCartney sideman Robbie McIntosh, the five-time Grammy winner got heads a-bobbin’, toes a-tappin’ and legs a-shakin’ with his ethereal introduction of “Heartbreak Warfare,” the Battle Studies opening salvo.

A tasteful note-for-note rendition of the high harmonics guitar solo also served notice that the Connecticut native could satisfy the divergent tastes of any number of fans in the audience; from the shrieking women who consider him eye candy and swoon at his brooding looks, to the serious musicians who hear the blues and R&B influences of Eric Clapton, Stevie Ray Vaughan and J.J. Cale in his impeccable six-string fretwork.

It’s the enormity of Mayer’s musicianship that is the eye-opening aspect for those expecting to hear the restraint he tends to demonstrate on his recordings, Battle Studies included. 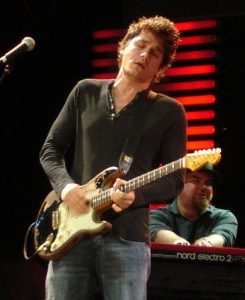 This non-Toronto concert image attributed to I, Truejustice via Creative Commons

This performance was anything but soft: a visit to 2006’s Continuum yielded a funky rendition of “Vultures” that ended in a climactic double-fisted strummed vamp that kept building momentum; Mayer’s rendition of Robert Johnson‘s blue classic “Crossroads” started off as a rough ‘n` tumble sweat-fest that was all granite and steel; and a lengthy workout of “Waiting On The World To Change” began somewhat routine and recognizable, before the guitar-slinger and his crew modulated into a different key, switched the tempo and delivered a transcendent exhibition of Berklee-schooled jazz that was as uplifting as it was inspiring.

Even as a singer, the mocha and caramel inflections of Mayer’s reserved tenor are less nuanced, though certainly more soulful, as he finds himself carried away his passionate expression. As a result, Mayer’s material took on a Jekyll/Hyde existence of its own: “Half Of My Heart” was much more lively and forthcoming than the Battle Studies‘ version featuring Taylor Swift; heightened by the call-and-response chorus of “ohs” the 32-year-old solicited from the more-than-willing audience.

Not that they needed much coaxing: it’s a good bet those who witnessed the manic guitar solo blowout of “Gravity” and flew on the soaring wings of “Bigger Than My Body” will be making the trek to the Air Canada Centre on Feb. 14 to claim John Mayer as their Valentine.