How do you write songs that have political overtones without being perceived as political?
.
Veteran Toronto rock musician and Broken Social Scene member Jason Collett.

How do you write songs that have political overtones without being perceived as political? 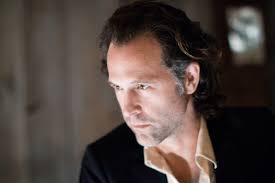 It’s a dilemma local hometown songwriter Jason Collett finds himself in with Reckon, his fifth and latest album that was released earlier this week on local indie label Arts & Crafts: pen clever observations like the ska-dusted “I Wanna Rob a Bank” and the folk ballad “Don’t Let the Truth Get to You” that reflect topical social and economic injustice, remain entertaining and not turn off your audience.

“This is the thing,” sniffled Collett from his home phone on Tuesday as he nursed the colds of both him and his seven-year-old son.
“I work very hard at keeping this kind of rhetoric out of a song, this kind of intellectualizing of it. I only do it in the interviews afterwards. It’s very important to me not to turn people off the record, but still allow those feelings in. It’s not an easy thing to do.”

For the record, Reckon — which Collett will showcase this Tuesday at the Great Hall with a star-studded cast of pals as he kicks off a 29-date world tour — is an amusing, sober and at times lighthearted response to the financial malaise he’s witnessed over a decade of touring, largely in the U.S., both solo and as a member of Broken Social Scene.

“You make a wrong turn going on the highway into Philadelphia, or you go from Austin, Texas and across Arizona and head to L.A., and you see it: boarded-up shops and the foreclosed homes. I made those routes pretty regularly over the last 10 years and I’ve seen it get a lot worse in the last four.”

Collett, says the theme of loss ricocheting throughout the 15 songs of Reckon came naturally.

“Like a lot of people, I pick up the paper every day,” explains Collett, who simultaneously released Essential Cuts, a retrospective celebrating the 10th anniversary of his label Arts & Crafts that accompanies Reckon.
“I was in the studio starting to record just as the Occupy movement broke out, and it felt serendipitous. I noticed that there’s an international groundswell of people saying, ‘Enough with the disparity between our elites and the rest of us — the middle class and the poor.’
“I don’t really think of this as a political record, nor was I interested in writing those kind of songs. The narrative comes from a personal place: something that’s permeated so much of our lives and found its way into the writing.”

“It feels like I’m 10 years old and inviting all my best friends to my birthday party.”