Perhaps there’s hope in the pop world after all.

By: Special to The Star Nick Krewen Published on Mon Sep 17 2012

Perhaps there’s hope in the pop world after all.

Inundated as we are by hormonal determination of the female tween populace regarding such lightweight romantics as the Justin Biebers, One Directions and numerous copycats whose musical, puppy-eyed declarations of love carry the emotional resonance of a Twix candy bar, it seems as though not all of the ladies have been taken in by the scam.

Apparently there’s still room for intelligence, intellect and poetry — at least, if the lustful predominantly female crowd that screamed at the top of their lungs during the opening strains of “Give Me Love” at Monday night’s Ed Sheeran Echo Beach appearance is any indicator. 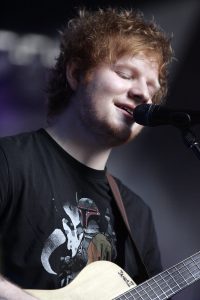 At the ripe young age of 21, the solitary Sheeran, whose all-ages appearance was upgraded from the Kool Haus due to his popular growth spurt, still flies within the radar demographic boundaries worshipped by followers of the Biebs and the One Direction lads, if just only.

But rather than concentrating on butterfly platitudes, Sheeran — armed only with his guitar, a couple of microphones and his BOSS loop pedal RC-30 — offered more substance within the confines of his romantic context than the countless parade of Tiger Beat cover candidates.

So he was many things to many people last night: charming host, telling multiple stories about playing at festivals and relative’s weddings, the turning tender with “Kiss Me.”

He was a doting expectant parent on another sensitive song about hope and innocence called “Small Bump and a “ soulful gospel man on “Wayfaring Stranger.” Of course, his unique ability as a “hip-hop” folkie to stuff multiple syntaxes into such numbers as “U.N.I.” and his tour-de-force, “You Need Me, I Don’t Need You,” stretched into marathon proportions during last night’s four-song encore.

If there’s a consistent aspect to the good-natured Sheeran’s talent, it’s as a first-rate craftsman who combines the best elements of pop — strong melodies, memorable choruses and sturdy hooks — into an intellectual and sentimentally fulfilling art, probably best represented by the big hit that concluded his nearly two-hour set, “The A-team.”

But what really makes him stand apart is his approach, which employs a bit of economy and some sonic trickery. Everything instrumental is played on a single acoustic guitar, but with his loop pedal he conjures up harmonies and repeated accompaniment, in essence forming his own band live and on the spot.

He explained and demonstrated this magic during “Drunk,” instantly transforming himself from solo performer to group, and handily impressing the sold-out singalong masses of 5,000 or so in attendance.

As for the hunk factor: the ginger-haired Sheeran had a pink bra thrown at him four songs into the show. Some people don’t even have to try to impress.

Be the first to comment on "Ed Sheeran’s folk-pop sheer brilliance shines at Echo Beach: Review"