With the continuing Cold War between Cuba and the U.S. unlikely to thaw under their present regimes, musicians occupying the island  have found it nearly impossible to find career traction when restricted to staying within local borders.

However, thanks to the continuing efforts of soprano saxophonist and flautist Bunnett and her trumpeter husband Cramer since their first Santiago visit in 1982,  the spotlight on Afro-Cuban music and numerous styles ranging from mambo and rumba to son and salsa has been constant.

“Cuba has really macho thinking,” notes the Havana-born Olano as she sits on the roof patio of Bunnett-Cramer West end Toronto duplex one late October afternoon.

“Now there are more women in the cultural positions of power,” Bunnett explains. “Before, it was all men.  When women start to get into those positions, they help out younger women.”

For Olano and five other Havana-born women, the conversation changed when Bunnett decided to form Maqueque – which means, in translation, the energy of a young girl’s spirit –  in 2013  after hearing singer Dayme Arocena during one of Toronto radio station JazzFM91’s “jazz safaris” to Cuba, which Bunnett co-hosted.

“It was just going to be a one-off project,” Bunnett recalls. “I didn’t expect it to take on the life that it did.” 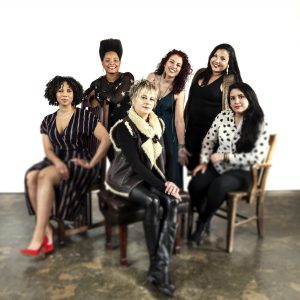 When she was first recruited, Olano had no clue who Bunnett was or how strongly she had impacted Cuban musicians, bringing their music to the world to the point that she was awarded the Order of Canada.

“I wasn’t on the jazz scene,”  Olano recalls. “And the  misinformation around is unbelievable. But then, I mentioned I was in a band headed by Jane and people were telling me she had done a lot for Cuban musicians.

“The biggest names in Cuban culture came through Jane and when she was doing it when it was hard to get Cubans out of Cuba. Now it’s easier.”In terms of the life that Bunnett has brought the all-female ensemble, which just released its third album, On Firm Ground/Terra Firma in September and plays Hugh’s Room Live on November 10, it has included touring the world, scoring a 2015 Best Jazz Album Group Juno win for its self-titled debut, a Best Latin Jazz album Grammy nomination for 2016’s Oddara and glowing praise from such trusted jazz outlets as DownBeat Magazine and NPR’s Jazz Night in America.

The lineup has changed over the years, with Maqueque 2019 consisting of co-founders Bunnett, Olano and drummer Yissy Garcia and new members Mary Paz on percussion and Tailin Marrero on bass. Recently, the sextet invited its first non-Cuban colleague, Zimbabwean singer Joanna Majoko, into the fold, replacing Arocena who has continued on a solo path but still contributes to the band recordings as a special guest.

For Olano, who had not traveled outside Cuba prior to co-founding Maqueque, it was a game changer.

“It was really impressive for me and everybody, especially coming first to Canada. We have been around and the culture, the people here, the way you get treated – the system was – wow! That was my first impression.”

Yet, like most Cuban musicians, it was daunting for her to get this far. The impoverished conditions in a communist country where Olano says “it’s easier to drink alcohol than get toothpaste,“ makes it challenging to find even adequate instruments on which to practice and perform.

“You’ve got to make the best out of the worst,” Olano explains. “Even at schools, the pianos aren’t always good. Most of the time they are really bad. You have to step up and do whatever you have to do to get what you need.”

Bunnett, who has also brought technicians to Cuba from Canada to help repair school instruments, says she’s shocked by the state some pianos are in.

“I have photos where teachers and students are sitting cross-legged on the floor because the legs of the piano have been eaten away by termites and the instrument is sitting on the floor,” Bunnett recalls. “I can’t imagine what that does to your technique or to your back.”

Olano lucked out by receiving her grandmother’s American upright piano, but even after an expensive reparation, the day came where she could no longer play it.

“When you reach your 15th birthday, a girl in Cuba receives a big party,” she explained. “My mother had saved up a bit of money, and I told her, rather than a party, I should get a piano with that money.”

Luckily, a friend who was leaving the country sold Olano her piano for $500 U.S.

“You won’t get a new piano in Cuba. We don’t have a manufacturer,” she laments.

There have been other obstacles: Olano spoke little English until after Maqueque finished their first tour, but a more unique difficulty was adjusting as a disciplined classical music pianist to one who can improvise jazz.

The adoption of Olano to a new musical language was a huge challenge for an admittedly exasperated Bunnett, who discloses that she wasn’t initially sold on the pianist being part of the band.

“I had to be patient,” Bunnett concedes. “Even though Danae was the best of all the piano players, she still wasn’t  there.  She played the piano with the pedal down and all the chords would be running together. Larry would say, ‘Just give her time. Look, there’s something really special that she’s got. Mark my words.’

“After that first record was done and after our first tour, she took off. Now I have to eat my words every day!”

Even the Cuban sessions for that first record – Jane Bunnett and Maqueque – proved demanding.

“Our rehearsals were disastrous,” Bunnett remembers.  “They were so frustrating. You’re supposed to go down for four or five days of rehearsals and then go into the studio. We rehearsed at a place called Las Vegas, kind of a drag queen bar, where Dayme’s Dad was the manager.

“We had no luck . We’d set up an electric piano and an electric bass and the electricity would go off. We’d be sitting in the dark for hours, not able to play anything.

“We ended up going into the studio ill-prepared, spending way too much time doing rehearsals before takes and eating up the money that way. We also went to a studio where the piano was broken and another studio that was a mess.

“But we did it and it ended up getting a Juno.”

“Right now, we’re in the process of lining up our work for the next two or three years,” Bunnett explains. “We have to get the petition approved and that takes a good year to accomplish.

“Dánae organizes the girls visa appointments at the Cuban Embassy here – the girls are here in the house for 10 days and hopefully their visas are processed and we go to our gigs. It’s a lot of work.”

“We really have to work it like a family,” she explains. “There’s all this time that we spend together as people living in a house. Everybody takes turns cooking.  Larry and I give up our privacy – especially for him with six girls in the house – but they give up sacrifices too, because they’re not with their families or in their environment.”

Their Toronto co-habitations also serve as the only occasions that Maqueque can rehearse and write.

“We rehearse more here because usually it’s entailed with waiting for our visas,” notes Bunnett, adding that they split their days writing and rehearsing the sensual and lively melodies that comprise On Firm Ground/Tierra Firma over a six-month period in between touring Oddara.

As a result, the new 73-minute album has compositional contributions from every group member.

“It’s good for the group because they feel more invested,” says Bunnett.

With such necessities as food, transportation and toiletries being hard to come by, touring with Maqueque gives Olano and the others respite from the daily hardships in their country.

“When you get to see the outside world, it hits you – why is this happening in my country?” Olano asks rhetorically.

Bunnett says the desire for improvement also resonates deeply within the DNA of Cuban musicians.

“There’s such an incentive to play music in Cuba for a variety of reasons,” says Bunnett. “One of them is that if you’re good enough, you might be able to travel outside of the country. And also growing as a musician – you develop.

“Everyone loves music in Cuba. If Canadians come to Cuba and they go off the resort and into the city, they see there’s an incredible sophistication and culture as well as a competitiveness between musicians.

“But playing opportunities are slim because of the need for permission to do things. In Canada, I can go out and stand in the street,  put a pail out, play my saxophone and make $25.

“You can’t do that in Cuba.  As a young woman who think you can go out and do it on your own? Forget it.”

With On Firm Ground/Terra Firme tour stops planned in Germany, France, Ireland, London, Argentina, the Dominican Republic, Houston and other locations this year and next, Jane Bunnett is expanding the global footprint of Maqueque while planning the next step of its evolution.

“I’d like to do a Maqueque big band record, with a very large ensemble,” says Bunnett, who will be returning to Santiago with husband Cramer for another JazzFM91 jazz safari in January.

“I think the time will be right to adding six or eight more women into the mix, because now we’ve got a really strong foundation with the six of us.”