Haim added even more power to their hits, recalling influences such as Led Zeppelin and Heart, on stage Thursday.

If you want to start a really good band, you may as well form one with your siblings, if you have them.

Consider these factors: you start playing instruments at a young age; you’re all under the same roof and you can practice constantly at your own convenience in the family basement, garage, etc., until you become that enviable well-oiled machine. 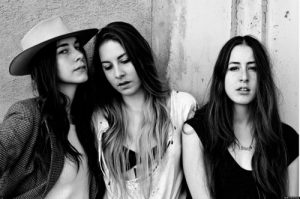 And if you’re looking for the poster band du jour when it comes to displaying those disciplined chops, there may not be a better example of shared gene pool telepathic musicality out there at the moment than is present in the San Fernando Valley-raised trio of sisters called Haim.

Anchored by the equally solid rhythmic foundation laid down by drummer Dash Hutton, the sisters Haim (pronounced Hy-um) were not only confident and cohesive in their united front, but they also surprised the masses from the get-go by offering much more aggressive renditions of selections from their first and only album, Days Are Gone.

The tone for the 75-minute set was set from the very first note of “Falling.” Actually, it was more of a chest-rattling blast of bass and drum fuzziness that officially declared that what we were about to hear would stray considerably from the expected.

On the record, tunes such as “Forever” and “Let Me Go” are offered as slightly funky slabs of power-pop that, due to Danielle’s vocal phrasing, draw comparisons to Fleetwood Mac’s Christine McVie.

On stage, however, the trio channeled another influence absent from their studio output: Led Zeppelin. About 10 minutes into the show, Este Haim — who proved herself to be a bassist of considerable technical prowess — proclaimed she was so enamoured with Toronto’s hospitality that she would invite everyone back to the Haim household in California for a good old-fashioned jam.

And with that proclamation, the Haim sisters let it all hang out, jumping into a hard rock instrumental frenzy that featured Danielle’s screaming guitar licks, frenetic drumming and a trio of long-haired manes flailing about as the girls channeled their inner Heart (“Barracuda”-era.)

Haim also kept it fresh and lively, refusing to take the easy path of performing note-for-note studio renditions. There were enough re-arrangements of a few bars here or a changeup there to keep the proceedings fresh and the crowd curious, with the biggest reinvention reserved for the climatic coda of “Let Me Go,” as all three sisters abandoned their main instruments, took up the drums and ended the evening in a storm of tribal rhythms, making for quite the showstopper.

As far as first impressions go, Haim not only lived up to the hype that preceded them (they’ve already accumulated a pretty large following in the U.K. and Europe) but indicated that they’re capable of forging an unpredictable path, and will do so strictly on their own terms.

The warning volley has been fired: The sisters are indeed doin’ it for themselves.

Be the first to comment on "Haim sisters give it their all in searing Toronto debut: review"