Skrillex
At Echo Beach, May 30
3 stars

The Mothership had barely landed before it was ceremoniously launched back into orbit.

From the opening strains of “Try It Out” — and for 90 incessant minutes thereafter at Echo Beach on Friday night — six-time Grammy winner Skrillex, one of electronic dance music’s current mainstream propellants, led his estimated 4,000 or so followers through an intensive and energetic workout of throbbing and pulsating electro house, dubstep, post-hardcore, ragga and polyrhythmic cacophony.

It’s apparent that the California DJ and producer behind the pseudonym – Sonny Moore – has retained some of the showmanship expertise he learned while fronting the band From First To Last not so long ago, albeit know-how with an ostentatious twist: the booth from which he commandeered his one-man spectacle was perched atop a set that resembled a giant alien spacecraft. 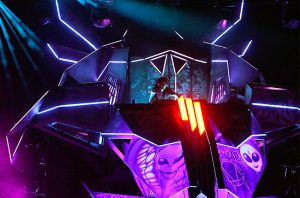 Thanks to the magic of hydraulics, this spaceship had the capacity to lift Skrillex high above the crowd, where he occasionally ventured out onto its outer hull to rally his charges, before leaping back into the cockpit to trigger the next sequencer.

But aside from infectious grooves that motored such classics as “Bangarang” and More Monsters and Sprites’ “First Of The Year (Equinox)” and motivated witnesses into a rave-induced frenzy, Skrillex’s biggest weapon was his engaging sense of humour.

It wasn’t anything he outwardly said or did, mind you, but the accompanying visuals that spilled the beans: animated aliens of all shapes and sizes projected on a giant screen behind him, bouncing along to the feverish beats, green lasers shooting from their eyes.

There was other imagery, too: at one point there were excerpts from Hollywood flicks like Ghostbusters, with caricatured alien heads superimposed in place of the heads of the actors, and also what looked like a bad Bollywood impersonation of Michael Jackson’s “Thriller” video, but it was mainly the extraterrestrial theme that drove the concert’s visuals, based on the otherworldly space invader cover of Skrillex’s recently released – and only album – Recess.

There were some passing nods to the classic pioneering video game Asteroids, as hovering animated spaceships were occasionally blown to smithereens, and a parade of twerking aliens, marching aliens and dancing aliens that did not alienate. Occasionally the camera would flash on Skrillex, a pair of headphones on his head, as he jumped and danced about while instigating the mixes, or from behind him, offering a panoramic view of the sea of partiers before him.

Truth be told, some of the revelers were as entertaining as the show, such as the pair of gentlemen who wore dayglo squid headpieces as they mindlessly rocked to “All Is Fair In Love and Brostep” and a girl wearing a bright green top, shorts and baseball cap who glided effortlessly to each and every rhythm and beat Skrillex threw at her.

Some wore rainbow-hued fur boots, giraffe and V for Vendetta masks; others would stare at the stage without moving a muscle, and then suddenly burst into spontaneous choreography once the right tempo hit them. It was a great night for people watching.

For most of the evening, Skrillex did a great job of pacing: amping the crowd up for a half-hour and then cooling them down for a few minutes. The only letdown was the anticlimactic ending, where Skrillex had the audience crouch down as low as possible, had them jump up as high as possible, and then promptly concluded the show.

But I guess part of the showman’s credo is always leave them wanting.

Be the first to comment on "Skrillex gives revelers energetic workout: review"