Against the breezy backdrop of palm trees, candles and an oversized wicker chair, GRAMMY-nominated singer/songwriter Lana Del Rey gave an equally cool performance on May 13 at the Sony Centre for the Performing Arts in Toronto.

Armed with a sultry contralto that was occasionally lost in the sound mix, the New York native (born Elizabeth Woolridge Grant) seemingly could do no wrong in front of the 3,500 diehard fans who filled any empty space usually reserved for oxygen with their golden voices as an impromptu choir, singing along to every note of “Video Games,” “Born To Die” and even the newer “West Coast,” much to the pleasant surprise of the diva herself. 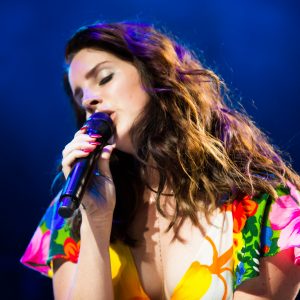 Many in the crowd dressed in tribute to their idol, with flower bandanas in their hair, while the entertainer herself went for an unadorned, natural look, dressed simply and conservatively in a blue blouse that was tied at her midriff and jean shorts. For 75 minutes Del Rey trotted out material from her 2012 Born To Die album and GRAMMY-nominated Paradise EP, leaving “West Coast” and “Cruel World” as the only previews of her upcoming second album Ultraviolence, which is scheduled for release on June 17.

I wish I could say the talented 27-year-old worked up a sweat, but truthfully, the show was an affair that rarely deviated from its mid-tempo pace, with Del Rey slowly wandering around different parts of the stage with a minimum of expression or expressiveness, her stellar four-piece band doing most of the heavy lifting with their excellent musical support. Popular songs such as “Summertime Sadness” and “Gods And Monsters” were enthusiastically received and faithfully performed, without deviating much from the original.

There was also a gigantic screen positioned center stage that projected scenes from her numerous videos, enhancing the Del Rey sound that some have described as “cinematic.”

But the lack of theatrics or dramatics mattered not to her devotees, who were endeared to Del Rey even more when she ventured to the front of the stage to mingle with the first row and submit to selfies with fans who requested them.

Despite a minimum of stage banter, Del Rey seemed to cast a spell among her acolytes that left them more enchanted as they made their exit after her final song, “National Anthem,” and with no promise of an encore. But still, Lana Del Rey could do no wrong.

To catch Lana Del Rey in a city near you, click here for tour dates.

(Nick Krewen is the Toronto-based co-author of Music From Far And Wide: Celebrating Forty Years Of The JUNO Awards, a contributor to The Routledge Film Music Sourcebook and has written forThe Toronto Star, TV Guide, Billboard, and Country Music. He was a consultant for the National Film Board’s music industry documentary Dream Machine.)

Lana Del Rey At The Sony Centre For The Performing Arts | GRAMMY.com

Be the first to comment on "Welcome to the Set List: Lana Del Rey at the Sony Centre for the Performing Arts, Toronto"