Our Events, and received the Critics’ Choice Brit Award. 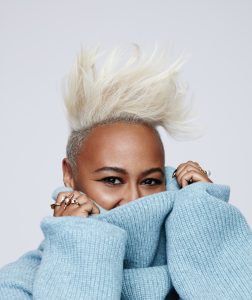 Emeli Sandé, who plays The Drake on Wednesday, is the next big thing from the U.K.

Looking for the Next Big Thing?

You can find her Wednesday night onstage at The Drake, accompanied by guitar, a cello and percussion.

Although Emeli Sandé’s debut album Version of Our Events won’t be released here until June, the buzz emanating from across the Atlantic is already impressive and considerable: the 24-year-old singer has won over the music-writing sect with the Critics’ Choice Brit Award, and Version steamrolled its way to the top of the U.K. charts upon its February release.

It’s not surprising when you hear the album: it’s a self-assured (think a U.K. equivalent to Janelle Monáe) 14-song soulful pop masterpiece replete with epic melodramatic heart-grabbers like “River” and “My Kind Of Love,” and a roaring voice that will send chills scurrying down your spine. 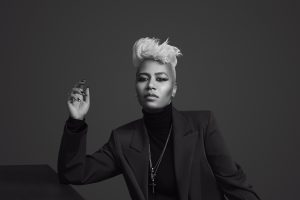 “I never do things by half measure,” chuckles Sandé, a coat draped around her shoulders, in the bowels of a downtown hotel conference room Tuesday afternoon, before an industry-only showcase that was also held at the Drake.

“If I want to do science, I’ll do medicine. If I want to do music, there’s no in-between, so I guess that’s how I approach relationships as well,” she giggles.

Yes, before she embarked on life as a songwriter, penning music for such Simon Cowell discoveries as Susan Boyle, Leona Lewis and Cheryl Cole, Sandé entered the world of medicine . . . at least, she schooled for it.

“I loved studying medicine,” says Sandé, who says she would have been a neurologist or a psychiatrist if music hadn’t intervened.

“It was always in my head that I was a musician, but I wanted to get a degree and thought, after I did this, I’d love to do music.

“But then when a door opened up, I realized I couldn’t wait for another opportunity. So I graduated with my research degree, but I didn’t finish my doctorate.”

In the next breath, Sandé readily admits that medicine didn’t have a chance, such was her devotion to music. Born in North England to a Zambian father and an English mother, Sandé grew up a shy child and began singing when she was 4 years old.

But it was when she was 7 and she got the parental thumbs-up that the deal was sealed. 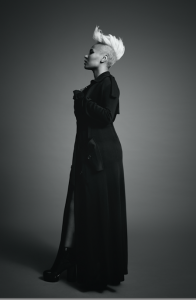 “I thought, ‘Well, if my Dad said I’m good, I’m going to be a singer,’” she says. “So I was always singing, and then I started playing instruments and writing. That was where I belonged: wherever I am, I’m a musician.”

She began writing and performing in jazz lounges. Among her chief inspirations: Nina Simone and Joni Mitchell.

“I think Blue was the first album I heard by (Mitchell),” Sandé reminisces. “Until then I’d heard very structured songs. And then she came and it was all about the poetry of the lyric and certain phrases would capture you instead of, ‘Oh, there’s a chorus.’

“That was just a whole new way of thinking about songs for me and I loved just how she writes a song, and she’s very free with it. I love that.”

Sandé gave up her Simone ambitions when she met her musical soulmate, Shahid “Naughty Boy” Khan, who produced most of Our Version of Events.

“That was a big lesson for me,” she explains. “I came from this ‘Oh Nina, I want to do this, I want to do that,’ mentality, and everything was very complicated, the lyrics a bit too overthought.

“And Shahid came along with a beat and taught me to simplify what I was doing. He would say, ‘Oh, maybe you only need four chords. It doesn’t make you any less of a musician: you should be more powerful with your lyric and go straight to the point.’ I started to understand pop and learned how to still say something but get it played on the radio. I veered away from jazz.” 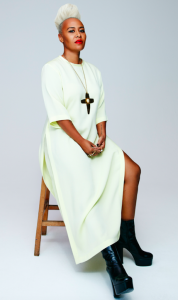 She also veered away from her first name. If life had been different, Sandé — who is currently co-writing with Alicia Keys for her next album, and opening for Coldplay at the Air Canada Centre on July 23 and 24 — would have been known by her first name, Adele.

“She was already on a big career path just before I released my first song, so I ended up going by my middle name, Emeli,” Sandé smiles.

Be the first to comment on "Emeli Sandé plays The Drake"