Alt-rock band that’s sold out Sound Academy got behind song’s use against bullying.

Young the Giant’s road schedule sees them return to Toronto in July for Edgefest.

A week ago, Young the Giant had its Glee moment.

In one of the better-written episodes of this uneven season, the show’s sensitive theme dealt with the consequences of homophobic bullying.

During one particularly powerful sequence, the Irvine, Calif. Alt-rock band’s “Cough Syrup” served as the backdrop to a scene where closeted high school jock character Dave Karofsky, who has been outed, is harassed to the point where he attempts suicide.

It’s a serious issue, one that bullying.org claims to happen every seven minutes on a Canadian playground, and immediately following the episode’s broadcast, Young the Giant singer Sameer Gadhia posted a video on the band’s website providing links and numbers for The National Suicide Prevention Lifeline and stopbullying.gov. 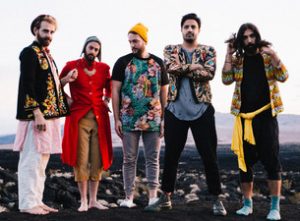 “That’s actually what drew us to it,” reveals drummer François Comptois, whose band kicks off the month of March Thursday with a sold-out show at the Sound Academy.

“We’re not really Glee fans necessarily. I’m not sure if I’ve ever watched a full episode. So when we got the news that they wanted to use the song, we were definitely apprehensive.

“But then we read the treatment, and realized it was dealing with something actually worthwhile, very heavy and pertinent to a lot of peoples’ lives, so we were on board instantly.

“It was very tastefully done. Hopefully that message will resonate.”

Montreal-born Comptois, the band’s lone Canadian, says Young the Giant is pretty careful when it comes to fronting their music to others.

“Sometimes it just comes down to something we can get behind,” he says. “It doesn’t have to have this big, overarching theme. But in cases where we might be a little bit on the fence about it, if there is something positive coming from it (then) we’re always happy to help.”

The band, which also consists of guitarists Jacob Tilley and Eric Cannata and bassist Payam Doostzadeh, has been resonating with audiences since releasing its eponymous album early in 2011, scoring radio hits with “Cough Syrup” and “My Body” and touring with such acts as Incubus, Marina and the Diamonds and the Futureheads.

Though not one of the founders, Comptois has been part of the group — which was known as The Jakes prior to signing with Roadrunner Records — since 2007, although he originally played another instrument.

“It was something I fell into,” Comptois explains.

“I was friends with their keyboardist at the time. We went to high school together. They were going through some lineup changes and needed a temporary bassist.

“I play a little bass, so I’d thought I’d fill in for a few weeks. Then we recorded the EP (Shake My Hand) together, and then we lost our drummer, who went to New York to pursue jazz drums.

“I also play drums, so I’d thought I’d be the temporary drummer for awhile. That was three years ago, so there was a lot of serendipity involved.”

Like everyone else in the band, Comptois has interrupted his education — he’s double-majoring in political science and international relations at the University Of California in Irvine — to explore Young The Giant’s potential.

“We’re all basically on a super-extended leave of absence. But we can return whenever we want, so it’s a nice fallback.”

Comptois expects a full family contingent to be present at Thursday’s show and when the band returns to Downsview Park on July 14 for Edgefest, since his grandparents, Marc and Nicole Comptois, live in Brampton, and other relatives live locally and in Newmarket.

“The best thing that I could say that I introduced the rest of the band to was poutine,” he chuckles.

“I think they were slightly repulsed by it at first, but I’m waiting for Montreal, where I’ve been saving myself so I can eat a triple-sized order. I think I’ll now be joined by the other guys, who have come around.”

Be the first to comment on "Gleeful? Young The Giant just grateful"