Musician’s tour of acclaimed album, including March 19 stop in Toronto, an opportunity to be homeless.

Claire Boucher is on the road as Grimes.

Nick Krewen
Special to the Star,
Published on Fri Mar 16 2012

After living in Montréal for five years, Claire Boucher is living the life of a gypsy.

“I’m homeless,” says the Vancouver-born Boucher, 23, known professionally as Grimes, from a tour stop in Florida, where she’s prepping a few SXSW appearances before making her way to the Horseshoe on March 19, touring her acclaimed new album Visions.

But she’s not minding it, citing a combination of economical and spiritual motivation as the reasons for her nomadic ways. 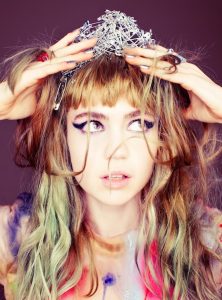 Over the course of a 15-minute phone conversation, one gets the sense that Boucher, much like her ghostly brand of four-octave, sample-driven, Cocteau Twins-inspired, phonetically nebulous, tribal groove pop that has graced four recordings, including Visions, is as spirited and as spontaneous.

For example, Grimes began two years ago for what Boucher says amounts to happenstance.

“I started doing it because all my friends were doing it, as lame as that sounds,” she explains. “It just seems that if everyone else could do it, then I could probably do it. Once there was some buzz on the Internet and it seemed even remotely feasible to pursue it, slightly more seriously, I just sort of did that.

It’s obviously way more fun than anything else I could possibly do.

“But once it started going, I definitely pushed it.”

Recording strictly on her own, Boucher used a Roland JUNO 6 vintage synthesizer and other gear to create her first dazzling work, 2010’s Geidi Primes, instrumentation she’s since stuck with for her follow-ups Halfaxa (also 2010), last year’s Darkbloom and this year’s Visions, likely to be a Polaris Music candidate when the long list is unveiled on June 14 in Vancouver.

Not surprisingly, British indie label 4AD, initial home to The Cocteau Twins and Dead Can Dance, as well as current signings tUnE-yArDs and St. Vincent, among others, came calling, signing Grimes for the world save for her local label, Outremont, Que.’s Arbutus Records.

“I can’t imagine anything being a better fit, really,” says Boucher of the 4AD signing. “Everything about it has been very smooth. Like it should be.”

The only aspect of the new deal she has slight reservations about is her inability to release new music as quickly as if she remained an independent artist.

“It bothers me a bit,” Boucher admits. “If I do a collaboration with a friend, I have to run it by everybody and there has to be these big talks about when it can come out, when before it was, ‘okay, let’s do it.’”

However, she also realizes that delays have their advantages.

“At the same time, I think it’s a really good thing, because instead of just putting out music whenever I want, and putting out everything, I’m going to think about it a lot more, and I think it’s forcing me to mature. I like the idea of censoring myself and spending a bit more time with stuff.”

Currently she’s learning what it’s like to work with a band, as Grimes’ tourmates — Born Gold — are joining her onstage. Is it a difficult adjustment to adapt solo music to a group?

“They just get up and do what they want, because I can play by myself,” Boucher replies. “I trust them. They just make it more psychedelic and dance-y. Like one guy, he just changes my vocals and live samples some of this crazy stuff. It didn’t seem very hard. The first couple of shows sucked, but then it was good.

“I think it was mostly me that made them suck, anyway.”

Boucher is equally flippant when it comes to the titles and meanings of her songs, which are often just a collection of symbols, or wordless meanderings.

“They’re all about shit in my life,” she states. “I distort things as much as possible so people can’t figure out what it’s about.

“But it’s all about shit from the last couple of years: I wanted this album to be about everything I hate about my life, dealt with, done, and the idea that everything is starting fresh, I guess.”

Boucher says Grimes is all about the dance, anyways, and if her music can inspire a case or two of happy feet, so much the better.

“There’s nothing more beautiful than dancing,” she states. “People are meant to dance. They should dance. And if I can make people dance, that makes me really happy.”

As for her own ambitions, Boucher — who is about to tour Europe — keeps them simple.

“I just want to not work in an office. As long as I can make music, I’ll do that. I want to work in films and stuff, too. Anything where I can be creative and not have to wake up too early, is good by me.”

Be the first to comment on "Grimes dances out of Montréal"