Alex Ebert is Edward Sharpe and usually happier for it.

Here’s some heartening news from the Edward Sharpe & The Magnetic Zeros camp: although they’re dropping their sophomore album Here on May 29, it won’t be the last new one you’ll get from the 12-piece collective in 2012.

“This album is one half, in some ways,” admits Alex Ebert, a.k.a. Edward Sharpe. “We were basically making a double album and then we split it into two, so here’s one, and the next one is going to come out before the end of the year. It’s quite a bit different than this one.”

Speaking down the line Thursday as he was walking the streets of New York City literally after completing a Late Show With David Letterman performance, Ebert says the newer project will contain “14 or 15 songs,” many of which will be rolled out at the Los Angeles band’s Kool Haus performance Sunday night.

Ebert describes Here as a logical follow-up to 2009’s Up From Below, an album that pretty much defies categorization: “40 Day Dream” is a soulful pop stomp with a hint of Waterboys; “Home” is a rollicking Mumford & Sons-styled folk frolic, and a slight mariachi/Spaghetti-western feel colours “Jade,” a song written for his female co-singer and guitarist, Jade Castrinos.

Stringed together by Ebert’s reedy tenor, Here is almost as impossible to define, with free-flowing folk, gospel and vaudeville overtones, although the chief songwriter sill cop that it’s more cohesive than the first.
“When we did the first one, we weren’t a band yet — just a bunch of friends coming together to pump out this album,” Ebert explains. “Also as we toured the first album, we got into really doing a lot of these acoustic shows, so I think all that is in some ways present on Here.”

As with the first Edward Sharpe & The Magnetic Zeros opus, there are many lyrical references to religion and spirituality.

“I would say it’s more meditative,” Ebert allows. “In some ways, it’s from an allowance of time and some sounds and some songs to just ‘be,’ as opposed to be a constant sort of jubilation.”

It probably isn’t such a surprise that Ebert is exploring his open-minded spirituality. In 2007, he was the lead singer of power-pop act Ima Robot and suffering from alcohol and drug addiction when he decided to make some life changes, transitions that required a period of isolation, in order to find his lost inner instinct.

It was during this isolation — without the modern crutches of cellphones and the Internet — that he invented his new music persona, Edward Sharpe.

“What I had to do was uproot myself from everything that was going on,” Ebert recalls. “So Ima Robot collapsed, and we got let go by our label, thankfully, and I was in a nearly four-year relationship, and I had always known that it wasn’t quite right, or not the thing that I needed to be doing at that time, and got away from that. I also had a house that I had bought, and I left there.
“It was a very slow and intentional process. The first thing to remember was how to write a song for the joy and love of writing a song, and not for someone else or to be on the radio or all this (BS) that started when I got signed to a major label, that I really put on myself.”

Ebert says he recalled simpler times in his own life, and applied the philosophy to his musical creativity.
“That’s part of what led to the music of this, which is sort of reminiscent of the stuff that we did when I was in elementary school — the sing-alongs, and the mentality of acoustic guitars.”

By 2009, he had met singer Castrinos in L.A. and taken Edward Sharpe & The Magnetic Zeros on the road, and built a reputation for exhilarating, uplifting performances that spread their reputation and spread the buzz quickly. 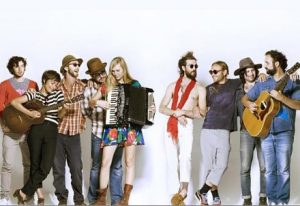 “It’s shed a lot of layers for me,” Ebert admits of becoming Edward Sharpe, which he says rids him of pessimism and lets him act with abandon.
“A lot of my protection is gone. I think that’s the biggest transformation: from rock star to child.”

But he maintains that the music of Edward Sharpe & The Magnetic Zeros isn’t all lollipops and rainbows.

“There’s a lot of sadness too and depth of feeling that goes into the real darkness that I’ve experienced, all with the will and spirit to overcome it and to transcend into something joyous.”

Sharpe also says there is safety in numbers.

“It’s just fun rolling around with all those people — it’s just great, man. It’s a blast.”

AUX TV will stream the Kool Haus show live on its Facebook page at 10 p.m.