Thursday night at the Air Canada Centre, Rise Against, the Chicago four-piece punk band with a social conscience, fired up its an estimated crowd of 11,000.

They could have taken the easy way out.

On the final night of its marathon Endgame tour — one which initially touched down last summer at Edgefest in Downsview Park — Rise Against could have simply repeated history and served up the same set list.

But Rise Against singer and songwriter Tim McIlrath doesn’t seem like the type of guy who does things halfway or likes to cut corners. 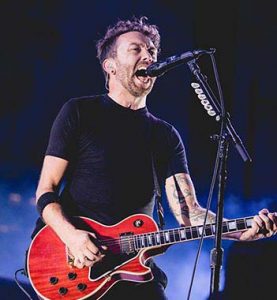 Thursday night at the Air Canada Centre in front of an estimated 11,000, the Chicago four-piece punk band with a social conscience fired up its crowd with a riveting 90-minute set that contained almost a dozen songs that differed from Edgefest.

The energetic performance largely centered around a magnanimous and humble McIlrath who dished out the passion and acknowledged both his followers, and Toronto-based peers such as Billy Talent, The Cancer Bats and the late Alexisonfire for their raison d’être.

“You may not realize it, but you’re our saviours,” McIlrath praised before launching into the night’s final number, “Savior,” one of many anthems to which the frenzied crowd sang, jumped and crowd-surfed.
Even though the sound wasn’t the greatest, and there were tunes where McIlrath’s voice was so raw it was questionable as to whether he was staying in key, Rise Against could do no wrong in the eyes of their disciples.

The show began as earnestly as one would expect; thin on-stage video screens depicting all sort of human misery and calamity, as the foursome took the stage and leapt right into “Survivor Guilt.”

Just before they jumped into “Collapse (Post-Amerika)” from Appeal To Reason, McIlrath mentioned several local venues where the band began their rise from cult act to mainstream sensation, with the Kool Haus, the Sound Academy and Wakestock all receiving cheers of recognition.

After a surprisingly early, and somewhat uneven rendition of their hit “Help is on the Way,” inspired by part by the damage Katrina ravaged upon the city of New Orleans and the U.S. government’s complete failure to handle the tragedy, the video screens transmitted footage of the Occupy America protests, and Rise Against answered with “Disparity by Design.”

While McIlrath might have been the chief connection, the remainder of the band was just as entertaining, with both guitarist Zach Blair and bass player Joe Principe executing impossibly high leg kicks and jumps as they provided the sonic dynamite, and drummer Brandon Barnes offered his steady wrists on rhythm.

As a band, their most unified performance occurred with “Satellite,” which shifted gears and emotional power with each tempo change, never losing a smidgeon of potency in the process.

Dynamic moments were short and sweet, the softest, most lyrical show moments occurring when McIlrath grabbed an acoustic for a short set, including Siren Song Of The Counter Culture’s “Swing Life Away.’

Opening act A Day To Remember from Ocala, Fla. may not have tunes as strong as the headliner, but they certainly know how to entertain and proved themselves adept at handling large crowds.

While singer Jeremy McKinnon’s nuances ranged from singing and shouting to screaming and growling through town-dissing songs like “All Signs Point to Lauderdale” and “2nd Sucks,” their use of cheap props such as toilet paper roll streamers and a t-shirt shooting-Gumby were novel.