Ian Thornley plays the Danforth Music Hall with Big Wreck on May 10 and 11.

Well, that’s one less albatross around his neck.

Ever since Ian Thornley added Big Wreck’s name to the ever-increasing pile of reunited rock bands, he’s been rewarded with an accolade he never received during the combo’s first late ‘90s run: a No. 1 rock radio record with “Albatross.”

“We’ve never had a No. 1 before — with Big Wreck or Thornley — I’ve never had a No. 1 song at radio,” he enthuses from a recent Canadian tour stop, prior to two shows this Thursday and Friday at the Danforth Music Hall.
“But how much of that is nostalgia . . . I don’t know if we made that much of an impact that people were so starved for it.
“Maybe it was time.” 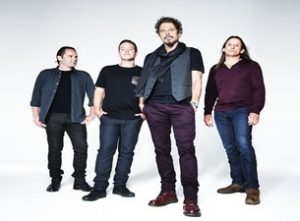 Chalk up Big Wreck’s revitalization to the double-guitar-edged, bottom-heavy sonic candy that seems to have made an impact on local rock airwaves stations; a sound that was initially embraced over a decade ago when the quartet originally met at Boston’s famed Berklee College of Music, signed with Warner Music Canada and delivered hits like “The Oaf,” “That Song,” and “Blown Wide Open,” all off their double-platinum debut In Loving Memory Of . . .

Surprisingly, the album title ended up being somewhat prophetic, as the band’s follow-up effort, The Pleasure And The Greed, tanked.

But even that ran its course.

“I wanted to bring the Thornley thing to a close, at least for now,” says the band’s namesake, who most recently signed with Rush’s label Anthem.

“We changed labels and I started to do music that I wanted to do. Not that I didn’t want to do any of the stuff in Thornley, I just always felt it was me trying to fit into something that I wasn’t quite cut out for.”

The reconnection with Doherty occurred two years ago. “Brian and I were friends before we started Big Wreck, so we’d stay in touch every now and then.
“I just missed hanging out with my buddy, so it was a Sunday afternoon phone call. Later, Paulo Neta, the other guitarist in Big Wreck now, couldn’t make a Thornley show and he suggested asking Brian. So it’s what started everything.”

He also admits that the sessions that became Albatross weren’t necessarily going to be issued under the Big Wreck moniker.

“Truth be told, we weren’t going into the studio saying, ‘OK, we’re making a Big Wreck album,’ ” notes Thornley. “We were just making an album, and the fact that Brian was back in the fold, it was maybe halfway through the recording process that someone suggested it.

“I wasn’t really that hip to the idea of calling it a Big Wreck album, largely because Forrest and Dave — the two guys who formed the original rhythm section — weren’t involved. Then I just sat with it for a bit and realized, ‘Hey, the music sounds like a big wreck anyway — why not?’ ”

Thornley bandmates Dave McMillan and Brad Park on bass and drums respectively fill out the new Big Wreck lineup along with Neta and Doherty, and the singer says public response has been amazing.

“The shows have been fantastic, and it’s freeing in a way, because, being just under a different moniker, if we want to take a left turn in the middle of a song, we can,” he explains. “There’s going to be a little more jamming than in a Thornley show.”

“To keep doing it and carve out a living doing what you love is a pretty good way to go.”

Be the first to comment on "Big Wreck bigger than ever"