PUBLISHED IN THE HAMILTON SPECTATOR AUGUST 25, 1998

Seems American rock critics can’t quite get it right when it comes to defining and describing Cracker, the sardonic Richmond, Virginia-based rock group led by singers and songwriters David Lowery and Johnny Hickman.

So the band made it easy for them on their new album Gentleman’s Blues.

“I had to do something really specific,” says Lowery, 37, as he scrawls his signature over posters in the loft of his Toronto record company, and then passes them along to guitarist Hickman.

“Johnny and I talked about it beforehand, and any songs that are cynical, we gave them happy titles. And it completely worked!” 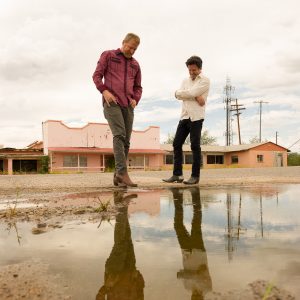 But it’s all old hat for Cracker, and especially Lowery, who earned his reputation as a savvy and humorous songwriter back in the mid 80’s when he fronted California alternative rock and college radio favorites Camper Van Beethoven.

Even though Cracker has continued the tradition by releasing three smart albums and penning sizable cheeky anthems “Teen Angst (What The World Needs Now),””Low,” and “I Hate My Generation” since their formation in 1990, the U.S. media has had trouble figuring out their appeal .

“Our fans get it,” said Lowery Friday, hours before the band performed a sold out date at Toronto’s Lee’s Palace and participated in Saturday’s Molson Park sellout for Pearl Jam in Barrie. The band hopes to return for a more extensive Canadian tour in November.

“It’s always people in the media who have the problem. A lot of them can’t figure out what people like about us after all these years. And our fans are starting to get more irate about it.”

“Yeah, they’re really coming to our defense,” adds Hickman as he presses a magic marker to a poster. “It’s heartwarming.”

Lowery mentions a positive Rolling Stone review concerning Gentleman’s Blues that caught the fans’ ire because of an errant detail regarding one of the songs.

“I had 25 e-mails addressed to me personally the morning the review came out,” says Lowery. “All these people were mad about this article, even though it was a small thing.

“I don’t take it that seriously,” he maintains. “Our way of dealing with it was giving every cynical song a happy title, and going from there.”

While Cracker may be stylistically difficult to pinpoint, both Lowery and Hickman have figured out that there’s one thing they’d like to avoid: rock stardom.

“What does celebrity get you?” asks Hickman. “Ask (Counting Crows singer) Adam Duritz. Ask Joan Osborne — people who really can’t walk through stores without getting mobbed.

“I feel so fortunate that maybe once or twice a week, somebody will come up to me and say, ‘Hey, I just want to tell you that I love your record.'”

“I discovered that I wanted to play music and not be famous,” adds Lowery. “There’s this little dichotomy. I really want to play music. That’s my heart: That’s what I really want to do. So I’ve got to organize everything so that’s the most important thing. And that makes your life so much easier.

“The whole point is to get out, get in front of people and play a show, get this interaction between you and an audience because that’s why you wanted to do it in the first place.

“It took eleven or twelve years to figure out that a lot of the stuff we assumed that we needed we really didn’t.”

It remains to be seen whether Gentleman’s Blues will pose a threat to their current status quo as a band who enjoys success and a modicum of fame, but the album is a good one.

As consistent and entertaining as their three previous albums Cracker, Kerosene Hat, and The Golden Age, Gentleman’s Blues — in stores today — captures the irreverent, witty dynamic that has earned the band a loyal following and sold them a few million records.

“I told Johnny a long time ago we should do a blues record as sort of a joke. Gentleman’s Blues  isn’t a blues record, but it has a blues attitude. We just went into the studio and played, and songs like ‘James River’, ‘Seven Days’ and ‘Been Around The World’ are live off the floor. Musically it’s a rootsier record, sort of a folk, country, blues thing.”

“We just figured it would be easier to play a weekend every second week,” Lowery explains. “We covered the whole country that way.”

It also made Lowery realize that Cracker doesn’t need to release a new album to increase its drawing power as a live act.

“We get more people coming out to our shows every year,” Lowery claims. “It just goes up and up and up. All of our old records keep selling.

“We come to Toronto just before our record is released and we sell out a show. Without a record we can sell out a show in New York. We can go to Los Angeles and sell out our shows. Whether we have a record or not doesn’t have much influence.”