PUBLISHED IN THE KITCHENER-WATERLOO RECORD, AUGUST 09, 1998

Ready for some raunch and roll? Think bands are too politically correct?

Then check out Nashville Pussy, the fearless foursome from Lexington, Kentucky who have been setting stages ablaze with their no-holds-barred approach to punk ‘n roll. 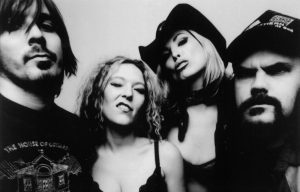 “We formed a band that we all wanted to go see. We all grew up listening to the cock rock of the ’70s, so it’s about sex and drugs and fire and all that other good stuff that rock ‘n roll stands for.

“People don’t want to see a bunch of guys in cut-off shorts looking at their tennis shoes. Audience members want to know that you’re bigger than God, larger than life. That’s what we are. For 55 minutes that’s our (expletive) stage!”

They’re not afraid to let it all hang out. During the course of the band’s hour-long raging, pulverizing set, Parks usually engages in some tonsil hockey with the other scantily clad woman in the band — Vancouver-born guitarist Ruyter Suys.

And if a few audience members get a little too close for comfort?

Wham! A well-placed boot to the head from Parks sets them straight.

“They have to learn,” Parks, 28, her demure Southern accent purring over the phone from a tour stop in Quebec City.

“Someone always has to be made an example of, because everybody else at the show can see that that’s just not how you conduct yourself at a Nashville Pussy show.

“It’s like coming to see wildcats at the zoo. You can stand up, stare at them and admire them. If they want to come up to the bars, run their head along the side and let you scratch them behind the ear, then it’s alright to do that. But you don’t go up there and stick your arm in the cage. If you do, you’re going to get your arm ripped out by the roots.”

The band is the midst of a five week Canadian tour that stretches from Halifax to Vancouver to introduce their debut Mercury album Let Them Eat…, and Parks says Nashville Pussy has only one goal in mind.

“We want to own Canada,” she says. “We’re not afraid to play — we clocked in 312 shows our first 14 months out. And we want to play everywhere.

“You know the kids out in Moncton, Fredricton, Sault Ste Marie and any of these smaller cities probably want to rock one hundred times worse than the main cities because they don’t get jack. Nobody comes to town.

“We were playing Fredricton and this red-haired, freckle-faced kid was standing in the front row. In the middle of a song I locked on this kid’s face and he was covered in sweat, jumping up and down. He grabbed his friend and said, `This is the greatest thing I’ve ever seen!’

It was during one of those Nine Pound Hammer gigs in Saskatoon that Cartwright met Suys. 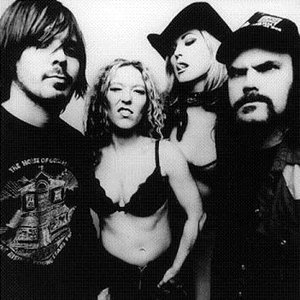 Nashville Pussy. That’s Corey Parks on the right, Ruyter Suys on the left

“They say it was a one-night stand gone really wrong,” jokes Parks. “They met, fell in love, got married in Saskatoon, and she went back to Nashville with him and started booking Nine Pound Hammer.”

Parks, who was living in North Carolina at the time, was “playing bass in a bunch of crappy bands and kind of waiting for my vehicle to come in, and it came in the form of Nashville Pussy.”

“They called and asked me if I wanted to play bass. I said, `Oh, by the way, did I tell you I breathe fire? ”

“Blaine said I was in the band before I could even play a note. I wasn’t that great of a bass player, but it was there idea that they could teach me how to play. That they have. It’s been five years running now, and everything’s going great.”

After selling 30,000 copies of their debut album Let Them Eat…, Mercury Records grabbed the band and tends to re-release a repackaged version of the 28-minute album September 1.

And the album art — covered in opaque wrapping to hide the graphic photo of Ruyter and Corey being serviced by two male models — is certain to make some headlines.

“Honey, that was the most enjoyable eight-hour photo shoot I’ve ever done in my life,” says Parks. “And the new repackaging is great because it folds out into a poster thats one hundred times more explicit than anything on the cover.”

Despite the shock value of the band’s album cover and performance, Parks maintains that nothing matters more than the music.

“It’s one thing to provoke people which we like to do, but we don’t want to overshadow the music,” Parks says. “Then you’re asking for more trouble than it’s worth.

“As far as musicial influences go, I’d cite anybody from Aerosmith and AC/DC to Motorhead — pretty much anything that cooks. We listen to a lot of Ike & Tina Turner, James Brown, Booker T. And The MGs., The Devil Dogs, Waylon (Jennings,) Hank (Williams Jr.): All the boys. Mostly, it’s heavy two-guitar bands.

“My job is to hold down the bottom end, play steady as a rock, and make my guitar players look good.”