Seventy-five years after his death, the legend of Hank Williams still looms larger than life. 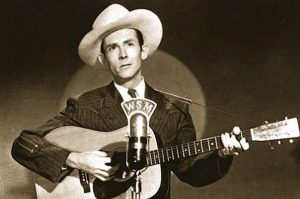 The Alabama native was not only country music’s most influential star, but its most colorful, packing a lot of living, loving, laughter and anguish in his brief 29 year lifespan.

Although Hank Williams left behind an ageless country music catalogue logjammed with immortal classics like “Move It On Over,” “Lovesick Blues,” and “Your Cheatin’ Heart,” his success was tempered with a stormy personal life, alcoholism and poor health.

But there was no one like him, and in honor of his 75th birthday on September 17, Mercury Nashville is preparing to release a comprehensive collection of the country music pioneer’s work.

The Complete Hank Williams, a limited edition 10-CD Deluxe Box Set, will feature 225 recordings, including 53 previously unissued tracks. It will be out September 22. 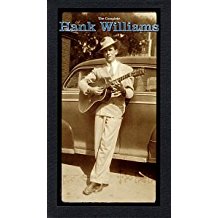 “This is the first time all of Hank’s available works — his demos, everything he recorded for Sterling and MGM Records, and his radio, television, and concert performances — are together in one collection,” says Colin Escott, author of Hank Williams: The Biography  and one of three producers who assembled The Complete Hank Williams.

The impressive numbers that posthumously earned him a berth in both The Country Music and Rock And Roll Halls Of Fame, plus an Academy Of Country Music Pioneer Award and a Lifetime Achievement Grammy speak for themselves.

Although his recording career lasted from 1947 until 1952, Williams enjoyed an unsurpassed string of hits. Of the 33 consecutive Hank Williams songs to land on the charts, only three of them failed to reach the Top Ten.

“Everything he released was pure of heart and free of compromise,” admits Escott.

“He died before he had a chance to make a bad record.”

“Hank was the most confident man I ever met in my life,” adds Merle Kilgore, legendary DJ, songwriter and manager who befriended Hank Williams.

“He was also cocky. He had dark, black, piercing eyes that could look right through you, and he called everybody `Hoss.'”

And the influence of Hank Williams still resonates deeply today. Hank inspired musicians from all walks of life, from Louis Armstrong and Elvis Presley to The Grateful Dead and Marty Stuart.

“We’ve spent the past forty years around Nashville trying to write a song as great as ‘I’m So Lonesome I Could Cry,'” Marty Stuart writes in the liner notes of The Complete Hank Williams.

The first stitch of that fabric was woven in the rented modest double-pen log house in Mount Olive, West Alabama on September 17, 1923, when Hank Williams was born to Elonzo Huble “Lon” Williams and Jessie Lillybelle “Lillie” Skipper.

Hank’s father wasn’t around much, hospitalized due to a paralyzing illness.

The burden of supporting the family landed on the shoulders of Lillie, who began working as a nurse in Georgiana, Alabama when Hank was 8.

She encouraged him musically, sending him to a singing school in nearby Avant and buying him his first guitar.

At the age of 10, Hank moved in with his cousins in Fountain, Alabama for a year, and discovered an activity that would haunt his professional and personal life: drinking.

Returning to Georgiana in 1934, Hank began performing as a street musician and met Rufus “Tee-Tot” Payne, a black blues singer who gave him guitar lessons until the Williams family moved to Montgomery three years later.

After auditioning for talent and radio shows, Hank dropped out of high school for life on the road. By 1939, he had formed The Drifting Cowboys, toured Texas and Mexico, and landed sporadic performances on radio station WSFA.

For four years, he supplemented his touring with occasional jobs at a drydock in Mobile, Alabama. It was during one of his frequent Alabama tours in in 1943 that he met the future Mrs. Williams, Audrey Mae Sheppard Guy, a person would who both inspire and torment him. They were married a year later at a filling station near Andalusia, Alabama. It was a stormy relationship.

“They had an Easter picnic one year at the Louisiana Hayride with all the members — Johnny Wright and Kitty Wells were there — and somebody gave Hank some beer,” Merle Kilgore recalls. “He got excited on that, and he and Audrey had a big argument. She hit him in the head with the bottle.”

“That was the big buzz around Shreveport — that Audrey almost killed Hank.”

But Kilgore credits Audrey for much of Hank’s success.

“If there wasn’t an Audrey, there wouldn’t have been a Hank Williams. She pushed, pushed, pushed. He’d rather be fishing or listening to a ball game or hunting. She was the one who lined up his business meetings.”

A pilgrimage to Nashville in 1946 to visit Fred Rose resulted in Hank’s first recording contract with Sterling Records. After two sessions, Hank signed with MGM Records, cutting “Move It On Over” on April 21, 1947.

Merle remembers meeting Hank Williams in 1948, just prior to his first appearance on the influential national radio program The Louisiana Hayride.

Merle hung out with Hank before showtime, and noticed Williams’ intense competitive streak.

“I remember The Bales Brothers were a real big act in 1948 — they came from the Grand Ole Opry. They were very popular, and they tore up the crowd. Hank looked at me and said, ‘I’ll eat ’em alive!’

Kilgore, who eventually penned such hits as Webb Pierce‘s “More And More” and Johnny Cash‘s “Ring Of Fire,” also discovered a surprising source of inspiration for Hank’s lyrics.

While his appearance on the Louisiana Hayride was a career high, his personal life hit new lows. Drinking problems led to Hank’s commitment to a sanitarium. His band left him, and wife Audrey divorced him for the first time, although they remarried in June. ”

Things looked up on March 5, 1949, when “Lovesick Blues” soared to the top of the charts and stayed for 16 weeks. Hank joined Opry stars Ernest Tubb, Cowboy Copas, Minnie Pearl and Rod Brasfield in May touring Texas, Oklahoma and Louisiana. On May 26, Randall Hank Williams — Hank Jr. — was born.

Hank’s career upswing continued with his debut at the Grand Ole Opry on June 11, and by the end of 1949 he was the second best-selling artist in country music after Eddy Arnold.

A string of Top Ten hits, including the #1 songs “Long Gone Lonesome Blues,” “Why Don’t You Love Me,” “Moanin’ The Blues” and “Cold, Cold Heart” carried him through the next few years, but then his health began to suffer.

Nagging back pains aggravated by a hunting accident found him in a Shreveport hospital in May 1951, treated for detoxification for pain-killing drugs and alcohol.

It was the beginning of a downward spiral for Hank Williams. In December, he entered the Vanderbilt University Medical Center in Nashville for a back operation, and a few weeks later his wife Audrey evicted him from their house and filed for divorce a second time. In May 1952, the divorce was final, and Audrey retained sole custody of Hank Jr., barring Hank from seeing his son.

“He was crazy about Hank Jr.,” says Kilgore, who now manages Hank Jr. “That was one thing in the divorce between him and Audrey that hurt him bad — that he wouldn’t be able to see Hank Jr.”

Beset by personal problems, Hank’s drinking increased. In August, he was fired from the Grand Ole Opry.

“That really hurt him,” says Merle Kilgore. “Even at the very end, he said, `I’m going back to the Grand Ole Opry.’ He was confident of that. ”

As life crumbled around him, Hank’s chart successes continued unabated. While both “Honky Tonk Blues” and “Half As Much” had to settle for the #2 position, “Jambalaya (On The Bayou)” struck #1 on August 16 and stayed there for 14 weeks.

Hank returned to Shreveport’s Louisiana Hayride in September, where Merle Kilgore ran into him and was shocked .

“I walked into the cafe, and there was this guy dressed in a black, old, wrinkled, filthy suit,” recalled Merle. “And I mean  filthy.

“He wore an old black hat, smoking a cigarette. He hadn’t shaved in two or three days. He looked like a derelict, and there were quite a few around that area. So I didn’t even look at the guy, and he said, ‘Hey, Merle. Ain’t you gonna speak?'”

Hank remembered their first meeting and asked Kilgore if he’d be there to help carry his guitar for the Hayride.

“I told him I’d be waiting for him at the foot of the stairs, and Hank replied, ‘Alright Hoss. I’m counting on it.'”

Ten days later, Hank recorded some of his biggest hits during his final session — “Your Cheatin’ Heart,” “Take These Chains From My Heart,” “Kaw-Liga” and “I Could Never Be Ashamed Of You.”

On October 18, Hank married Billie Jean Jones Elishman in a secret midnight ceremony in Louisiana, then married her twice the next day in public weddings in New Orleans. On December 19, he played his final concert in Austin, Texas. 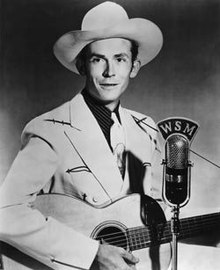 The end came unceremoniously for Hank Williams. He was found dead in the back seat of his car on his way to Canton, Ohio sometime between December 31, 1952 and January 1, 1953.

His enormous popularity lived on, and for the next six months, his songs “I’ll Never Get Out Of This World Alive,””Your Cheatin’ Heart,” “Kaw-Liga” and “Take These Chains From My Heart,” kept Hank at #1.

All his hits, plus his personal history, are well documented on The Complete Hank Williams, which will be suggested to sell at retail at $170 U.S.

There are also a few surprises.

“We found a lot of previously unpublished material that has come to light in the last few years,” Colin Escott told Country Weekly. “Hank’s sister Irene died, and Marty Stuart bought her archive. There were a lot of photos, letters, and acetates made from very, very early in his career.”

Even Hank Jr. contributed to the set, offering the original acetate of “Tear In My Beer” as part of an agreement with Mercury Records.

“Hank pitched the song to Capitol artist Big Bill Lister, who had the acetate when he returned to San Antonio, Texas, after the dissolution of The Drifting Cowboys in 1951,” says Escott. “He kept it under a tarpaulin, and then moved it to his loft, where it spent many summers in 150 degree weather.

“Big Bill’s son did some gun work for Hank Jr., and gave it to him. Hank Jr. overdubbed his part for the hit, and Mercury can now issue the original. It sounds amazing.”

There’s also a humorous alternative take of “My Bucket’s Got A Hole In It” provided by an early Shreveport associate, Frank Page.

“We didn’t know it existed until Frank hinted about it last year,” says Escott.

Although Hank may be gone, his legend lives on.

“I suppose Hank Williams is the ultimate country myth,” says Colin Escott. “Every kid that comes to Nashville wants to be him on some level. He wrote them, sang them, and performed them. Everyone would love to do that and achieve his level of success, while avoiding his fate.”

“He had a sense of humor, that magnetic personality, and everybody loved to be around him,” says Merle.

“He was the type of guy who could talk to a bank president or a guy sweeping the streets.”