Canadian folksinger raised $6,200 in the funny money toward production of new album.

Paper Nickels, the new album from Corin Raymond, above, and The Sundowners, was paid for with 32,000 Canadian Tire bills weighing approximately 60 pounds (27 kilograms).

At first glance, the dozens of bundles of banknotes covering folksinger Corin Raymond’s kitchen table might lead you to conclude that he had either won the lottery or, at the very least, a high-stakes poker game.

That is, until you notice that the face adorning each of the multicoloured bills doesn’t depict a former prime minister or Queen Elizabeth II — it’s the tam-wearing, wax-mustachioed mug of Sandy McTire, the fictional mascot found on every bill of Canadian Tire money.

The piles of cash before him only amount to about $6,200, but don’t try to tell Raymond he’s not a wealthy man. 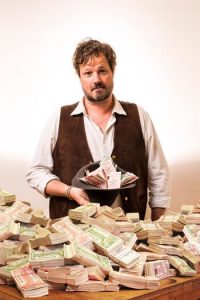 Corin Raymond and his funny money

“I feel rich,” he says, scouring the table in his Kensington Market home with a bewildered look on his face, “Man, this represents love.”

Raymond’s referring to the public generosity that has enabled him to finance a good portion of his new live “coffee table CD” Paper Nickels, recorded with his band The Sundowners at Toronto’s Tranzac night club a year ago this week. The band returns to the venue Tuesday and Wednesday for an album release party.
It’s a campaign that began in late 2011 with a song called “Don’t Spend It Honey,” has continued via his website dontspendithoney.com, and has resulted in a handsome and elaborate hardcover 20-song, two-CD set replete with a 144-page book that not only showcases the work of 16 songwriters but also contains donor letters, stories and essays about what the 40-year-old Raymond fondly refers to as “The Caper.”

“We wrote ‘Don’t Spend It Honey’ that mentioned the Canadian Tire money in it, and we knew that it was a fun song,” Raymond recalls. “As soon I started playing it, people started reacting to it and giving me Canadian Tire money.
“It made them happy in such a Canadian way.”

They gave it to him at house concerts, at Sundowners shows and when they ran into him on the street. They mailed him coupons with handwritten notes and illustrations. He made national headlines, was interviewed by The Wall Street Journal and had his cause taken up by the CBC comedy program This Hour Has 22 Minutes. Before he knew it, the entire country embraced what Raymond calls “Tire Fever.” It total he collected 32,000 Canadian Tire bills weighing approximately 60 pounds (27 kilograms).

“This is such an incredible feat of Canadian community,” Raymond acknowledges. “If you can light up people’s hearts, anything is possible. People were so happy to be involved with this — and I’m so far from alone here — thousands of people got involved.”

Although he’s still approximately $1,100 short of the $7,333.75 bill from Toronto’s Rogue Music Lab, which accepts Canadian Tire money at par and covered “the recording, the editing and the mixing,” Raymond says the experience has been invaluable.

“The love and the excitement and the delight and the laughter that people have gotten out of this, proportionate to the amount of money it actually is … you can’t tabulate that,” he notes. “That’s what amazes me the most — that people had so much fun with this.”

If he surpasses his goal, any additional coupons will be set towards future Corin Raymond recordings.

“Any Canadian Tire money I receive gets turned into art,” Raymond pledges. “I’m not buying any basketballs.”