Carrie Underwood didn’t need the fancy props she brought to her concert. This performer is magnificent.

Like her hockey-playing husband, Carrie Underwood knows a few things about scoring.

Twenty-four hours after centre Mike Fisher spearheaded an Ottawa Senators victory in a squeaker over our beloved Toronto Maple Leafs, Mrs. Fisher, a.k.a Underwood, returned to the scene of the crime — the Air Canada Centre — and netted more than 14,000 fans with two hours of riveting crossover country pop.

If you weren’t a convert prior to the show, you would certainly have been so afterward: The most successful American Idol champion of them all pulled out all the stops in a nearly two-hour show that rivalled fellow divas P!nk, Rihanna and Taylor Swift for dramatic props. 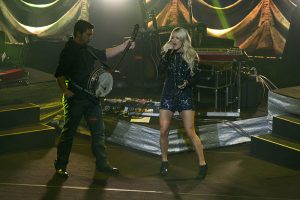 With yet another multimedia extravaganza that’s becoming a little too common these days, Underwood proffered animated backdrops, a half-dozen costume changes, massive hydraulics, recreated enchanted forests and even sang a duet — courtesy of pre-taped video — with country superstar Randy Travis on “I Told You So.”

But the thing that took it over the top occurred when Underwood stepped onto the back of a blue pickup truck midway through the show, and the truck soared through the air and flew around the ACC as she sang a cover of John Denver’s “Take Me Home Country Roads,” followed by “Undo It,” crowd cellphone cameras flashing away incessantly as the audience roared their approval.

Strangely enough, the eye candy — as spectacular and garish as it sometimes appeared — didn’t detract from the true star of the show: Underwood’s magnificent voice.

Man, can that girl wail! Whether it was on key climax points of songs such as “I Know You Won’t,” “Someday When I Stop Loving You” or “Jesus, Take the Wheel,” which she splendidly detoured into the classic “How Great Thou Art,” Underwood’s powerful pipes were undeniable, even overpowering an eight-piece band that already had the volume knob on its speakers cranked to 11.

Although the Grammy-winning Underwood chose the more stylized route — a good mixture of fast and slow material, tender and strident moments — the visual accompanying the music was never far behind, whether they were powerful country rock tunes such as “Before He Cheats” and “All-American Girl” — with the word “Canadian” substituted for our neighbours to the south when the opportunity presented itself — or sensitive heartfelt ballads such as ‘“Temporary Home.” 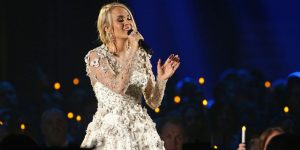 In truth, Underwood, who had a hand in writing a good half-dozen of the 24 tunes she performed, didn’t need the display: She could have stood on stage with just a microphone and the phone book, and the crowd would have been equally enraptured.

But in these days of sensory stimulation, Underwood knows where her bread is buttered and knows that the fans want to be bombarded with tricks and surprises.

Luckily, the music holds up, especially with a performer as gifted as Carrie Underwood.

Be the first to comment on "Carrie Underwood at the ACC: She sings, she scores"