Composer found music even in the frigid waters of the Arctic Sea. Over 80 albums and 32 years, revered Japanese cultural icon Ryuichi Sakamoto — who made a rare Toronto concert appearance Sunday at the Queen Elizabeth Centre — has dabbled in a lot of genres.

Since he graduated from his electronic music studies at Tokyo’s University of Art, Sakamoto, 58, has entranced us with the lighthearted techno glitch pop of Yellow Magic Orchestra; fused Asian and Western contemporary pop with such albums as Neo Geo and Illustrated Musical Encyclopedia; wrote sweeping award-winning scores for cinematic treasures The Last Emperor, The Sheltering Sky and High Heels; explored dance and the remix world with Sweet Revenge and Anger; spun out some children’s music in Peachboy, and delved into classical with Discord.

The latest creative partnership venture from this jack — actually, master — of all trades? A stoic one: an Arctic Sea glacier.

In 2008, Sakamoto and 40 other artists, musicians, writer, photographers, oceanographers, architects and scientists all sailed to the Arctic near Greenland as part of Cape Farewell’s Disko Bay Expedition to observe the effect of climate change due to global warming.

“I’ve been concerned about environmental issues since the ‘90s,” said Sakamoto, who makes his first Toronto concert appearance in over a decade with a solo appearance.

“And it was a long time dream to go to the Arctic Sea, so I jumped at the invitation. The nature over there was just breathtaking, and I was stunned by the gigantic amount of ice and water. It was unbelievable.”

Sakamoto didn’t come unprepared: he brought a hydrophone, which is an underwater microphone, and recorded streams of H20 pouring and trickling off the glacier.

“I recorded for hours,” recalls the Academy,Golden Globe and Grammy award-winning composer from his New York home last week. “When I came back from the trip, I sat in front of my computer, found some good bits here and there, looped it and used it.”

The results melded perfectly with the intent behind his latest album out of noise, merging the sounds with a trio of minimalist electronic ambient compositions: “disko,” “ice” and “glacier.”

“I was in kind of a cold mode when I started recording out of noise,” Sakamoto explains from his home in New York. “I wanted to express some quietness, coldness, stillness — and the sound of ice and water streaming over a glacier — most of those sounds were very cold to me.

“Those sounds from the Arctic Sea were perfect for the recording.” 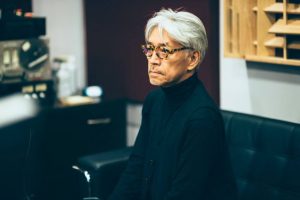 Currently working on duet albums with German electro avante-gardist Alva Noto and Austrian experimental guitarist Christian Fennesz, Sakamoto was appointed an Officer of the Order of Arts and Letter, France’s highest cultural honour, in 2009 in recognition of his wide body of work.

However, Sakamoto isn’t sure what privileges accompany that particular accolade.

“I heard that with that badge, I can get into a three-star French restaurant without waiting in queue,” he chuckles.