On the Buddy Miller-produced The Maze, her first album in six years, Ariana Gillis has finally found her sound.

This may not seem like such a big deal, but for a time, there was a question whether the 28-year-old singer-songwriter from Hamilton, Ontario, would ever play any of her riveting, self-described “Canadiana Americana; edgy pop with steel guitars” again due to a debilitating accident she suffered four years ago.

“We were planning to put out a record in 2015, but I ended up getting a concussion – a really bad concussion,” stresses Gillis, who will showcase The Maze at Hugh’s Room Live on June 29.

“It took around 18 months to recover fully. It was a really, really dark time.”

The accident seemed innocuous – Gillis quickly opened the door of her boyfriend’s car, clipping her head in the process.

“It’s crazy – it just felt like a little tap, a bump on the head, but obviously it was a lot more than that,” Gillis explains.

“Immediately, I started to feel nauseous. Everything started spinning. My eyes were darting oddly, so we went to emergency right away. Obviously, things got worse.”

As Gillis and her family frantically searched for answers from mystified doctors, the injury complicated her life to a point where she was barely able to function.

“I had trouble making a coffee myself,” she recalls, noting that she was sleeping 16 hours a day.

“I didn’t remember how to do that. Three or four months into my recovery, I remember picking up my guitar and trying to play and sing at the same time. I couldn’t do it. I just burst into tears because it was really traumatizing that I couldn’t remember the lyrics to my songs, or the chords, either.

“I was really scared for my future, because my music is my career, my life.”

After five months, Gillis was finally able to pick up her guitar…but challenges remained.

“When I was playing, I couldn’t look at anybody. As soon as I started looking at things, I would start to spiral. I’d lose track of where I was,  wouldn’t be able to play properly and would get frustrated. The feeling of being overwhelmed was incredible. I was constantly heightened  and anxious and I needed everything to stop ASAP. I had to turn all the amps to ‘zero.’”

Finally, she found a specialist and was properly diagnosed as having a “visual concussion.”

“He told me that with the metabolism of our brains, 70% of it goes towards process and vision alone,” Gillis recalls. “So, if you’re having trouble with that, then your mind can’t actually heal.”

The cure was simple and novel:  Gillis wears a contact lens in one eye.

“All the symptoms cleared up fairly quickly as soon as I did,” she announces. 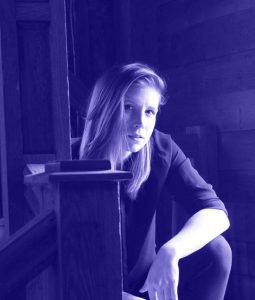 The biggest regret Gillis feels about the incident is the career momentum she lost on the heels of 2012’s Forget Me Not.

Aside from public declarations of encouragement by esteemed rock critic Dave Marsh and Elton John lyricist Bernie Taupin, Gillis had also played many sizeable U.S. venues to help set up 2015’s Head Full of Stars, an album forcibly reduced to an EP due to her ailment.

“We were still trying to work on it as I was recovering, and I wasn’t there,” she admits. “I couldn’t do any press. I couldn’t be on the computer. I couldn’t send out e-mails or be working with anybody at that point.

“Now it feels like things are finally getting back to where they were, but it’s been a long, hard road.”

Miller became interested and sought Gillis out after he had heard her songs on Taupin’s SiriusXM American Roots Radio program. He then saw her perform at a showcase at the City Winery in the country music capital.

“He loved the show. We talked afterwards and it eventually led to, ‘yes, let’s do an album.’”

The 11 songs comprising The Maze were recorded live off the floor with a coterie of impressive accompanists, Viktor Krauss (Alison Krauss, Lyle Lovett) on bass and keyboard and Jim Hoke (Paul McCartney, Billy Joel) on pedal steel, sax and keyboards, among them.

Noted Toronto drummer Gary Craig also contributes and Miller chimes in on guitars and mandocello. Ariana’s dad, David Gillis, a highly respected but underrated guitarist in his own right who regularly performs with her, supplies his six-and-twelve-string expertise, banjo and mandocello as well.

Arianna is no slouch herself on the guitar.

“My father always told me that I had to play and own my instrument,” she explains. “I feel like I’m solid as a rhythm guitarist.

I worship rhythm. The pocket is sacred to me. I need it to be perfect. I can play solo or band shows.”

The material, from the sprightly opening track “Dirt Gets Dirty,” and the rollicking parable “Jeremy Woodstock” to the solemn acoustic romanticism of “Lost With You,” was written by Gillis over an eight-year-span, with “Lost” and “You Don’t Even Know My Name” tagged on after the sessions were completed.

Gillis says the impact of producer Miller was life-altering.

“Buddy is the most humble guy I think I’ve ever met,” she enthuses. “There was almost zero sense of urgency.  Buddy has this way of making everyone so relaxed and so comfortable that he has made me change the way that I play and approach shows.

With additional appearances at the Dakota (tonight, June 20), Richard Flohil’s public 85thbirthday gathering at the Horseshoe (June 28) and a U.S. West Coast tour looming, Gillis is excited to be back on the road.

“I’m very, very proud of this record,” she states. “I finally found the sound that I’ve been looking for during the past 10 years. Buddy kept telling me, ‘it’s going to sound like a country album if you put a pedal steel in there.’

“But the songs aren’t country and I love it: I’m excited to explore that sound.”

That is, when she’s not pursuing her hobby – rock climbing.

Gillis says she takes precautions and isn’t worry about the possibility of suffering a concussion due to the sport.

“Rock climbing is puzzle-solving, strength, conditioning and cardio – all of those things in one,” she says. “If I’m stressed about anything, I get all of that out by using my mind and my body. It’s a great way to stay in shape.

“I fell in love with it and I don’t think I’ll ever stop.”