But that simply isn’t the case, bass player and guitarist Gwil Sainsbury of the Mercury Prize-winning quartet that appears at Sound Academy for a sold-out show Wednesday, reassures.

“There isn’t one,” said Sainsbury recently from Leeds, England, “But we have noticed that a lot of other people are obsessed with triangles.
“It’s interesting to play with this kind of imagery because a lot of people have alluded to the Illuminati and Freemasonry and conspiracy theories, and people are really into fractals. So it seems like this was very good at capturing interest.”

It may not be too surprising that Alt-J raises interests from the musically-inclined cognoscenti, because their 2012 album An Awesome Wave actually sounds like a conspiracy theory: jutting and angular rhythms framing a minimalist approach in songs like “Tessellate” and “Breezeblocks” that infuses synth-heavy trip-hop and peculiar rock rhythms with a dual-pointed harmony attack from singer Joe Newman and keyboardist Gus-Unger Hamilton. 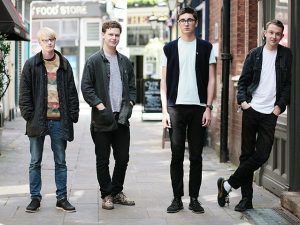 Adding to the intrigue is Newman’s distinctive, high-pitched croak, which simultaneously sounds exotic, soulful and slightly diseased, and his lyrical prowess that seems to be highly sexual in its nature, yet jumbled and purposefully vague in its cohesion.

“Joe writes the lyrics, and he views everything as a collage. He just takes things that he likes — maybe one line from a book or a scene from a film — write it down in his little lyrics notebook, and stitch it together other things that he’s remembered or misheard.
“He uses these rarely common experiences and they’re cultural reference points that some people know, some don’t know, but it gets people into the mood of the song, and gives them a vessel for which he can transport people into.
“Essentially, though, he’s talking about the same thing on the album: most of the tracks are about Joe and a girl — although it’s expanded beyond that to other tangents and realms that may seem random to some. It’s a little bit schizophrenic.”

It’s certainly enough of a novel twist to understand why An Awesome Wave topped less imaginative albums by Lianne La Havas, Jessie Ware, Django Django and others for the coveted 2012 Mercury Prize and subsequent platinum sales in the U.K.: it’s scoring something akin to a lottery victory for a band that wasn’t even sure it was going to pursue music when it began in a Leeds University dorm back in 2007.

“Joe and I just started recording with Garage Band,” Sainsbury explains. “He had a few songs that he had for years, and I added some guitar and bass parts to it, and in a very crude, basic and ignorant way, we put them down on Garage Band, pretty poorly produced, just to start working on something.
“A few of our friends listened to it, and that was it. We wanted to get a few more people involved, not so much with the intention of being a band, but more with the intention of just writing music and making our own recordings. Then we found our producer (the Laurel Collective’s Charlie Andrew).”

Sainsbury said winning the Mercury Prize validated Alt-J by “making us feel that we were a real band” and offered security for any future projects “because even if it takes five years to make a second album, people would still listen to it and it would still get reviewed.”

As for the Alt-J concert experience, Gwil Sainsbury says the stage is a work in progress.

“We’re much more a studio band than we ever were a live band,” he admits. “‘I don’t think we’re that energetic live because it’s quite minimal and technical. But it definitely has gotten more energetic.
“When we first started playing, we were completely static. We’d pick our spot on the stage and stand there and play for the whole thing, maybe with a bit of a head-nod.

“Now we move around a lot more, but it’s certainly not like a rock show. It’s not that level of energy. It’s much more of a listening experience.”